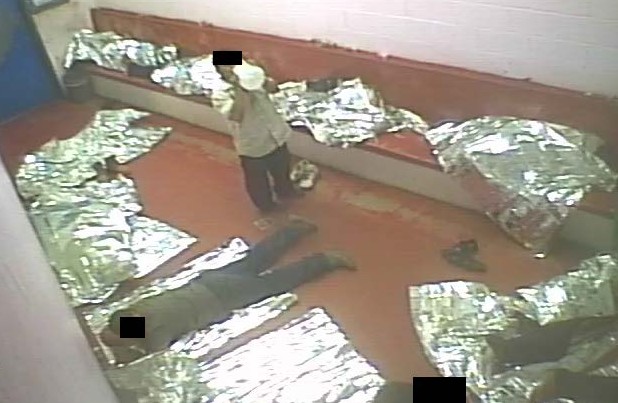 Each year, the Border Patrol—a division of U.S. Customs and Border Protection (CBP)—holds hundreds of thousands of individuals in detention facilities near the U.S. southern border. These facilities are meant to hold individuals for a short time while they undergo initial processing and until a decision is made about the appropriate next step in their cases. The holding cells are typically small concrete rooms with concrete benches and no beds. In other words, they are not designed for overnight custody. However, they are routinely used in this way.

Late yesterday, the American Immigration Council, the National Immigration Law Center, the ACLU of Arizona, the Lawyers’ Committee for Civil Rights of the San Francisco Bay Area, and Morrison & Foerster LLP publicly filed damning evidence, including expert testimony and video stills, illustrating the unconscionable and unconstitutional conditions detained individuals are subjected to while in Border Patrol custody in the Tucson Sector. The shocking images from the video stills show small children crawling on dirty, trash strewn floors, individuals huddled in Mylar sheets in an attempt to stay warm, others sleeping on concrete floors and benches with no mats, cells so crowded there is no room for anyone to move, and a man drinking directly from a shared water container because there are no cups. The evidence was filed in support of a motion for preliminary relief in a class action challenging CBP detention conditions in the Tucson Sector.

Adults and children are held in a cell with trash on the concrete floor without mats.

The video stills provide important visual proof of the reprehensible conditions that characterize Border Patrol’s holding facilities in the Tucson sector. The problems revealed by this evidence, however, are not unique to that sector. In fact, conditions such as  overcrowding, extremely cold temperatures, and lack of adequate food, water, and medical care have been previously reported for other sectors as well.

CBP and Border Patrol have guidance in place regarding both facility standards and length of detention. With respect to the latter, Border Patrol guidance states that a detainee should not be held for more than 12 hours. However, a report released by the American Immigration Council today reveals that Border Patrol is not in compliance with such guidance.

This report, which is based on never-before-released government data and documents obtained by the American Immigration Council through the Freedom of Information Act (FOIA), examines length of detention in nine Border Patrol sectors: Big Bend, Texas; Del Rio, Texas; El Centro, California; El Paso, Texas; Laredo, Texas; Rio Grande Valley, Texas; San Diego, California; Tucson, Arizona; and Yuma, Arizona. Looking at all sectors combined, the data reveals that a shocking 217,485 individuals (or 67 percent of the total number detained during this period) were held in CBP facilities for 24 hours or more; 93,566 (29 percent) for 48 hours or more; and 44,202 (14 percent) for 72 hours or more.

Men sleep on concrete floor and benches in Border Patrols Douglas facility; some near the bathroom with trash strewn on the floor.

Lengthy detention is a common occurrence in all sectors but in some of them it is remarkably more frequent. Specifically, the average amount of time that individuals were detained was over 24 hours across all sectors and the median number of hours individuals were detained was higher than 24 in 6 of the 9 sectors analyzed. Lengthy detention is alarmingly frequent in the Laredo, Rio Grande Valley, Tucson, Yuma, and El Centro sectors.  Laredo in particular shows the most disturbing numbers; 54 percent (19,000) of the 35,494 individuals held in detention facilities in Laredo were detained for at least 72 hours.

There may be many factors that explain this variation. According to DHS officials who we talked to for this report, the “surge” of unaccompanied children and families seeking refuge in the United States that occurred in 2014 led CBP to shift resources from other sectors to the Rio Grande Valley Sector in 2014, which may have impacted resources at other sectors and potentially extended length of detention in those sectors. However, it is worth noting that, on average, length of detention in RGV was still relatively high.

Considering the deplorable conditions of detention highlighted in other reports and clearly illustrated by the evidence revealed today, these findings are particularly alarming and require urgent attention.