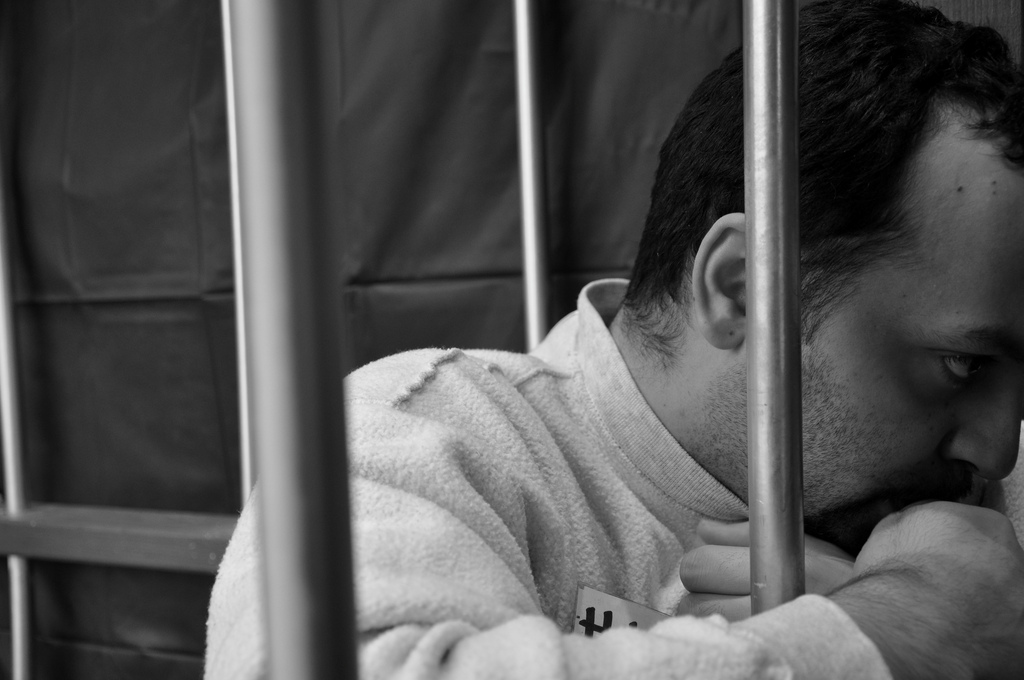 Although the U.S. Constitution provides citizens and noncitizens the right to seek bail after an arrest, immigration detention is different. Certain noncitizens who are arrested by immigration authorities may be detained for months on end, while awaiting hearings that will determine whether they can remain in the United States.

Many of these noncitizens are legal residents who have committed nonviolent offenses, or are asylum seekers who arrived at the U.S. border seeking protection from persecution in their home countries and turned themselves over to the Border Patrol. Even though these individuals may have families in the United States, jobs, or children to support, current law provides no right to ask a judge to release them on bond.

This week, advocacy organizations across the country filed briefs at the Supreme Court in a the case of Jennings v. Rodriguez, arguing that immigrants detained while awaiting their merits hearings in immigration court should have the right to a bond hearing.

In 2003, the Supreme Court first addressed mandatory detention in the case Demore v. Kim. Relying on statistics provided by the government, the Court concluded that most cases would be resolved in less than two months, and that contested cases would generally take no more than five months.

The Court reasoned that these periods were sufficiently “brief” and “limited” that the government’s decision to deny bond hearings did violate due process. Now, thirteen years later, the government has admitted that it provided false information to the Supreme Court. Instead of five months, the government’s own figures showed that immigrants who fought to remain in the United States were routinely detained for more than a year before a final decision was rendered in their cases.

Recently, the Supreme Court agreed to hear Jennings v. Rodriguez. In Rodriguez, the Court will have the opportunity not only to address the mistakes in Demore, but to answer the question of what happens when detention is neither “brief” nor “limited.”

The Ninth Circuit Court of Appeals’ decision in Rodriguez set forth a bright line rule: once an immigrant has been detained for six months, he or she must be given the opportunity to ask a judge for bond. If the judge finds that the immigrant is clearly a flight risk or poses a danger to the community, the judge can deny bond. But if the immigrant is neither dangerous nor likely to flee, then a judge must set bond and allow the person to return home and fight his immigration case outside of detention.

In support of the Petitioner in Rodriguez, the American Immigration Council, along with the American Immigration Lawyers Association, filed an amicus brief arguing that the Supreme Court should end mandatory detention without bond by overturning Demore v. Kim. The brief relies on data showing that since 2003, over 32,000 immigrants have been detained for over six months while awaiting decisions in their cases, and that over 2,000 have been detained for more than two years during the same period.

The data also shows that immigrants detained without bond hearings are no more dangerous or likely to flee than those who are permitted to request bond.

In addition, the brief notes that the Supreme Court’s concerns in 2003 that, if released, immigrants would not appear for their hearings, can be addressed through alternatives to detention, including community-based programs and electronic monitoring.

Finally, the Council’s brief argues that Demore v. Kim departed from a long history of U.S. law that prevents the government from locking people up without allowing them to challenge that decision before a judge. The brief highlights the words of the Honorable Karen Nelson Moore, a judge on the Sixth Circuit Court of Appeals, who wrote that Demore was “the first time that the Supreme Court [had] upheld categorical preventive detention outside of a wartime context.”

Because Demore marks such a departure from precedent, the Council urges the Supreme Court to overturn it and hold that detention for more than six months without a bond hearing is never acceptable.

Many other organizations also filed amicus briefs with the Supreme Court in support of Rodriguez. These groups include the National Immigration Project of the National Lawyers Guild, the Immigrant Legal Resource Center, Asian Americans Advancing Justice, the National Association of Criminal Defense Lawyers, Human Rights First, and many others. The Supreme Court will hear arguments in the case on November 30, 2016.