Some Veterans Observe Memorial Day Under Threat of Deportation 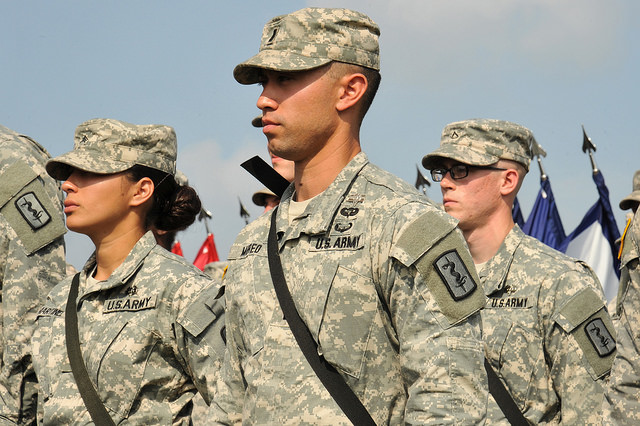 This Memorial Day, Americans honor U.S. service members who have died while serving their country. Enlisting in the military, and risking one’s life, is considered a powerful demonstration of gratitude and loyalty to one’s nation. And for many, the decision to serve the United States is also a decision to serve their adopted country.

Immigrants have a long history in the U.S. military, dating back to the Civil War and earlier. An estimated 43 percent of Union soldiers were immigrants or the sons of immigrants, and one-in-four members of the Union army was an immigrant.

Immigrants’ contributions continue to this day. In 2016, for example:

Immigrants also make up an estimated 5 percent of today’s active-duty force. The Department of Defense has stated that some 18,000 noncitizens serve in the military at any given time, with 5,000 legal permanent residents (LPRs, or green card holders) enlisting annually.

Despite this history and the foreign born’s ongoing dedication to American ideals, many immigrants who have risked their lives for their adopted country face steep immigration challenges.

For some immigrant veterans, the benefits—including citizenship—they believed they were also signing up for have yet to materialize.

Beginning in 2001, an expedited process for citizenship was established for eligible noncitizen military personnel in recognition of the risks that service members from all backgrounds undertake. Since then, U.S. Customs and Immigration Services (USCIS) has naturalized nearly 110,000 service members. Approximately 85 percent of immigrant veterans have become naturalized citizens as of 2016.

While the current administration has affirmed that the expedited path to citizenship for immigrants in the military is still in effect, veterans have come forward with their stories of the immigration battles they now face, after fighting for their adopted homeland.

While the government does not track deportations of veterans, a 2016 report by the American Civil Liberties Union counted at least 250 deportations of U.S. veterans since 1996, though other veteran support organizations estimate the real number is in the thousands.

Joaquin Sotelo, a U.S. Navy veteran who served for six years, believed his citizenship had gone through after filling out his naturalization application and confirming with his military superiors. Yet, he had not become a U.S. citizen.

In an interview, Sotelo said:

Sotelo and many other veterans are now fighting their deportations in order to stay with their families in the United States.

Representative Vicente Gonzalez (TX-15), who has nearly 40,000 veterans in his district, recently described the problem:

“They come home, they make a minor mistake and next thing they’re deported. In a sense, we’ve breached their contract. Because we have an agreement and they fulfilled their end of the bargain and we’re not fulfilling ours.”

Immigrants are vital to this country, and those who have served the United States in the armed forces deserve respect, due process, and support when they return home. On this Memorial Day, Americans should remember the sacrifices of all service members and work to ensure that all of our veterans are treated with the dignity and respect they deserve.