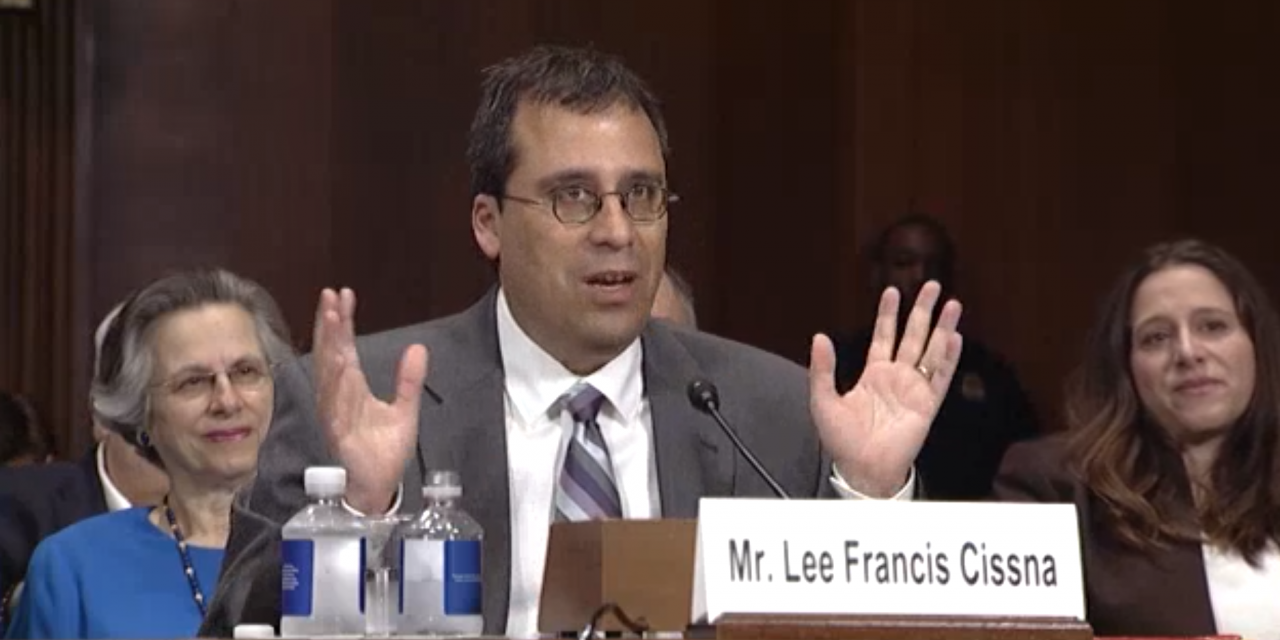 President Trump’s pick for the next director of U.S. Citizenship and Immigration Services (USCIS), Lee Francis Cissna, recently testified before the Senate Judiciary Committee. This was the first congressional body to publicly vet Cissna after his nomination.

The content of this hearing, coupled with his work advising the Trump campaign, and cozy relationship with a notorious anti-immigrant hate group have given some pause about what the future of USCIS may look like under his leadership.

If confirmed, Cissna will oversee the agency in charge of all lawful immigration into the United States. Yet, his apparent hardline stance on immigration seems to clash with the responsibilities of running such an agency, which includes processing applications for citizenship, family and employment-based visas, and granting asylum or other humanitarian relief.

In Cissna’s opening remarks, he focused on his own mother’s immigration story, noting that his “family is literally a product of our nation’s legal immigration system…these experiences will undoubtedly illuminate everything I do as USCIS Director.” However, the rest of his testimony and the public record tell another story.

The questions at the hearing focused on employment-based immigration. In response to questions about high-skilled immigration and related visas from Ranking Member Coons (D-DE) and Senator Hatch(R-UT), Cissna focused less on how to improve the systems for bringing in these workers and more on his belief that a goal of U.S. immigration policy should be to improve and advance the economy, as well as the position of American jobs and workforce.

Cissna also gave few details about how he would manage or change processing of immigration benefits if confirmed, offering no specifics when senators questioned him about his views on H-1B, H-2B, H-2A, and EB5 visas. Rather, he merely responded by pledging his commitment to carry out the president’s executive orders on immigration, including thorough reviews of immigration policies and procedures. He also provided few details about E-Verify, the government system employers can use to check if someone is authorized to work, stating only that he believes the program to be a priority of the Trump administration and would benefit from reforms that incentivize the program’s use.

While not discussed during the hearing, reports have surfaced of Cissna’s involvement in criticizing—and advocating for the end of— humanitarian immigration programs created under President Obama, including allowing Deferred Action for Childhood Arrivals (DACA) recipients to use “advance parole” to travel in the cases of emergencies, protections for victims of crime, and efforts to keep asylum-seeking families together.

Also troubling are the close ties between Cissna and the Trump campaign.

In the public version of his nomination questionnaire, Cissna stated that “Starting in September 2016 I volunteered approximately once per week with the President’s election campaign… I offered technical assistance to the campaign regarding immigration policy and operations.”

As the Trump campaign adopted many hard-line positions on immigration throughout the election, it’s hard to imagine he wasn’t party to developing some of them.

His anti-immigration attitudes were confirmed by Mark Krikorian, the executive director of the anti-immigrant, hate group Center for Immigration Studies. Upon learning of Cissna’s nomination, Krikorian remarked that he was “very knowledgeable about the immigration system” and added that much of President Obama’s work around immigration is “likely to be undone by Cissna,” including a regulation that provides work permits to the spouses of H-1B workers seeking permanent residence in the United States.

In possibly the only hearing before the Senate decides whether or not to confirm Cissna, he offered little concrete information about how he would approach his role as director or what changes in immigration policy he would pursue. Much remains unknown about what USCIS would look like should Cissna be confirmed as director, but the information that is available is gravely concerning to many.