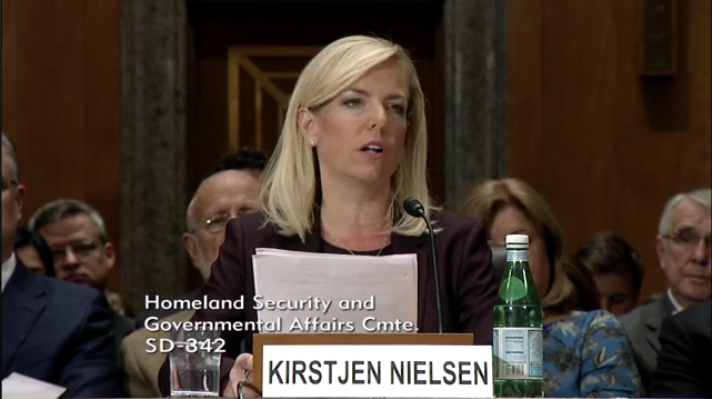 The nominee to be the next Secretary of the Department of Homeland Security (DHS), Kirstjen Nielsen, had her confirmation hearing before senators on Wednesday, during which she promised to largely carry on the legacy of her predecessor, General John Kelly.

This included limiting President Trump’s plans to build a wall along the U.S.-Mexico border. Echoing Kelly’s stance, Nielsen emphasized that “there is no need for a border wall from sea to shining sea.” She told the Senate Homeland Security and Government Affairs Committee (HSGAC) that the border should instead be fortified with additional technology between ports of entry, fencing, and personnel.

“We’re not going to build a wall where it doesn’t make sense…”  Nielsen affirmed.

Nielsen, who currently serves as White House Deputy Chief of Staff, was nominated in October 2017 by President Trump to replace Kelly as he transitioned to his role as White House Chief of Staff. Nielsen has worked in the homeland and national security sectors for more than two decades, having worked with the Transportation Security Administration and in various roles at DHS. She was endorsed by Tom Ridge and Michael Chertoff, two former heads of DHS under President George W. Bush as well as General Kelly.

In addition to inquiries on the border wall, Nielsen faced questions on how she will handle the termination of the Deferred Action for Childhood Arrivals (DACA) initiative, as well as how she would run DHS and implement various immigration enforcement policies.

As it relates to DACA, Nielsen urged Congress to find a “permanent solution” for individuals brought into the United States without authorization as children. She committed that DHS will not share DACA recipients information except in limited circumstances as it relates to national security. In these instances, Nielsen said she would consult with senators.

After being questioned by Democratic senators on DHS’ immigration enforcement priorities, Nielsen noted that DHS should prioritize criminals and national security threats.

Unfortunately, Nielsen’s rhetoric does not appear to match DHS’ current practice. In the first nine months of the Trump administration, the agency has arrested three times as many people with no criminal record when compared to the final year of the Obama administration.

Lawmakers also asked about the surge in Central American migration to the United States, which occurred as a result of endemic levels of violence that have continued to pervade the Northern Triangle region of Central America, which includes Guatemala, El Salvador, and Honduras.

To her credit, Nielsen noted that extreme violence in these countries plays a significant factor for migrants, but emphasized that DHS ought to continue deterring individuals from making the trek to the United States altogether. She also desired a way to expedite the removal of unaccompanied children back to Central American countries, which would raise significant due process concerns.

Overall Nielsen showed a general knowledge of key immigration issues, but in reality committed to very few specifics. If confirmed, it will be important for Congress to hold her and the agency accountable.

HSGAC will hold a vote on Nielsen’s confirmation later this week, where it is widely expected she will be approved. She will then need to be voted on by the entire Senate. The Trump administration has indicated it hopes she can receive her full confirmation from the Senate by Thanksgiving.