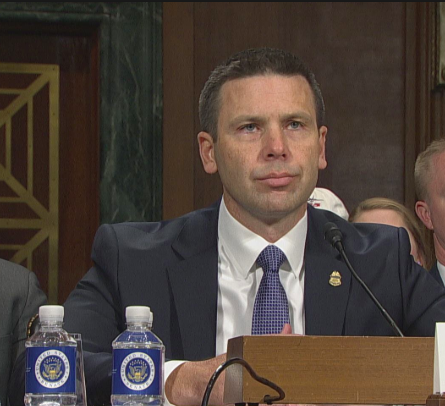 Only weeks after being named the new Acting Secretary of the Department of Homeland Security (DHS), Kevin McAleenan made his first appearance in front of the House and Senate Appropriations Committees this week. While it’s clear DHS will not change course on many of the policies implemented by former Secretary Nielsen, McAleenen seemed intent on resetting the relationship with Congress.

By contrast, McAleenan, a veteran at DHS who joined the agency after 9/11 was treated warmly by both Democrats and Republicans in his first appearances. They praised him for his experience and dedication to the job and thanked him for engaging with their offices, something that Nielsen rarely did.

Throughout both hearings, McAleenan showcased his reputation for being a policy wonk, and avoided parroting President Trump’s rhetoric. Where Nielsen once told Congress “We need a wall” to stop drugs, McAleenan stated that DHS needed “nonintrusive inspection technology, border barriers, and surveillance capability.”

On other matters of substance however, McAleenan struggled to differentiate himself from the former secretary. He called on Congress to amend asylum laws to revoke protections for many families and to permit indefinite detention of families. He also repeated inaccurate claims about asylum seekers rates of court appearances.

McAleenan also struggled to answer questions about Immigration and Customs Enforcement (ICE), likely due to his long tenure at CBP and lack of experience with ICE. When asked about ICE raids targeting counties where local law enforcement had ended voluntary cooperation with the agency, McAleenan struggled to give any specifics. This lead Rep David Price (D-GA) to complain that he was being “pretty generic” in his answers.

Similarly, McAleenan continued to voice support for programs like the so-called “Migrant Protection Protocols” where individuals are forced to remain in Mexico while awaiting hearings. He described the program as an “effort to provide greater access to court hearings,” a far cry from the reality of the program. New reports indicate that few asylum seekers subject to the program have lawyers and that many individuals subject to MPP have victimized or endangered in Mexico.

In many ways, McAleenan’s unworried attitude towards the troubled implementation of MPP provided the biggest glimpse into his tenure as Secretary. Although Members of Congress view him as having credibility for now, they may grow frustrated if he continues to downplay problems facing the agency, especially where vulnerable populations are at risk.

In addition, with the chaotic management shakeup at DHS only weeks gone by, his fate at DHS remains uncertain. As Rep. Nita Lowey remarked, “It seems like the car is driving off the cliff with no one to take the wheel. Though I guess, Mr. Secretary, you are now the driver, so congratulations.”