Volunteer Found Not Guilty After Providing Humanitarian Aid to Migrants 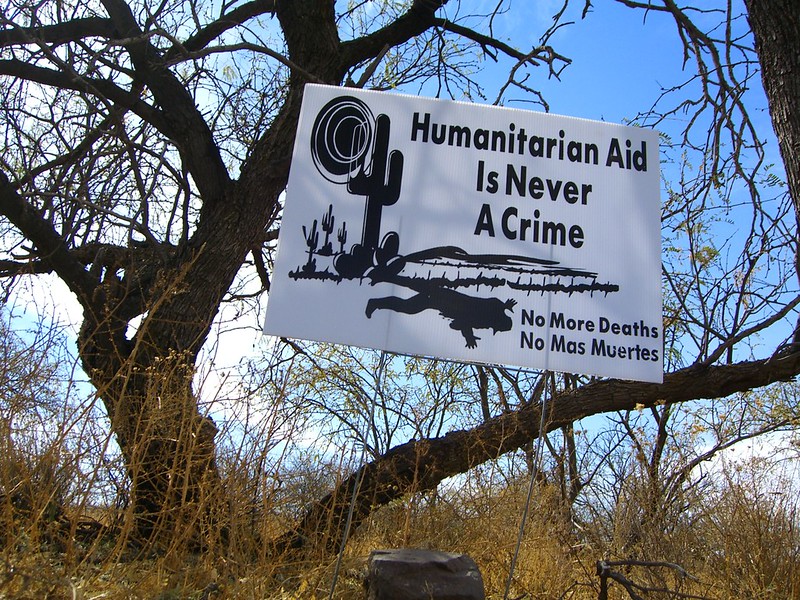 Over the last decade, the remains of more than 1,600 people have been found in the Arizona desert. Groups like No More Deaths, whose mission is “ending death and suffering in the U.S.-Mexico borderlands,” work to decrease that number. Their volunteer-based work is motivated by the slogan “Humanitarian aid is never a crime.”

Last week, No More Deaths volunteer Scott Warren was acquitted of two felony charges of illegal harboring related to his humanitarian work, for which he faced up to 10 years in prison.

No more deaths volunteers leave supplies in the desert, and in some cases provide medical care and shelter if they happen to come across someone who needs it.

At a humanitarian aid station in Ajo, Arizona in January 2018, Warren provided food, water, and shelter to two Central American migrants after they had entered the United States without inspection. Border Patrol agents surveilling the private property arrested Warren and the two migrants.

Warren was first tried on these felony charges in June and July 2019. The trial ended in a hung jury, but the government decided to retry the case. For Warren to be found guilty of illegal harboring, the prosecution had to prove that he knew or recklessly disregarded that these individuals were in the United States without authorization and that his conduct facilitated their ability to remain here.

However, No More Deaths volunteers are careful to ensure that their services fall clearly within the category of humanitarian aid. After only two hours of deliberation, the jury agreed, finding Warren not guilty.

Warren has also faced several other charges in separate cases related to his volunteer work with No More Deaths. In 2017, he was one of nine volunteers charged with misdemeanors after leaving humanitarian supplies in a wildlife refuge.

The judge announced last week that he had been found not guilty of littering. However, Warren was found guilty of driving on a restricted road in a wildlife refuge and is set to be sentenced in February. The government dropped a conspiracy charge after the June mistrial.

While the acquittal is good news for the humanitarian community, the right to provide aid is still under attack.

After the trial, Michael Bailey, U.S. attorney for Arizona, commented, “Although we’re disappointed in the verdict, it won’t deter us from continuing to prosecute…the harboring…cases…we have. We won’t distinguish between whether someone is harboring or trafficking for money or whether they’re doing it out of a misguided sense of social justice or belief in open borders.”

The prosecution of criminal harboring has so far been uncommon. However, in 2017, Attorney General Jeff Sessions issued a memo to federal prosecutors, ordering the increased prioritization of five immigration-related crimes, including harboring. Warren’s trial can be seen as a test run for how easily the government can prosecute those who facilitate an undocumented immigrant staying longer in the United States.

If the Trump administration had succeeded, it could have created a chilling effect, discouraging people from helping immigrants. This would be part of the rising trend of making life difficult for immigrants, in the hopes that they will give up and return to their home country.

Under the Trump administration, the criminalization of immigrant advocates has increased significantly. Amnesty International found that since 2018, the U.S. government “has executed an unlawful and politically motivated campaign of intimidation, threats, harassment, and criminal investigations against people who defend the human rights of migrants, refugees and asylum seekers.” This campaign has included surveillance, warrantless searches, prolonged interrogations, detention, and travel restrictions.

Humanitarian volunteers do difficult, lifesaving work all along the U.S.-Mexico border. The aid they provide should not be treated as a crime.