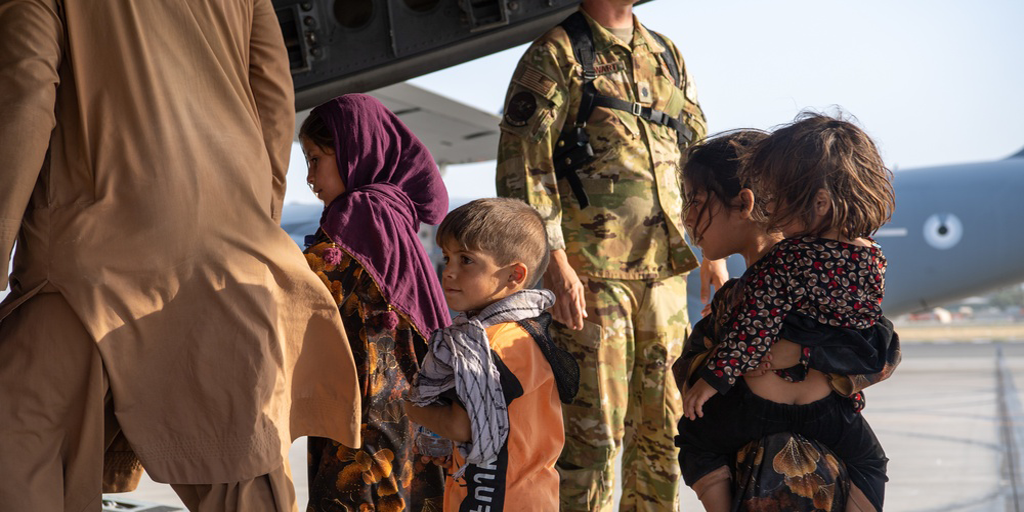 As the United States hastily withdrew its military presence from Afghanistan in August 2021, it began Operation Allies Welcome, a program designed to assist the tens of thousands of Afghans who successfully fled Afghanistan as the Taliban took control. Many of these individuals had previously assisted the U.S. military and its allies throughout the decades-long war, and others were at serious risk of harm. But tens of thousands of Afghans were unable to flee. Months later, many of our allies have been denied protection in the United States or remain in limbo.

These rejections are coming despite the fact that both Department of Homeland Security (DHS) Secretary Ali Mayorkas and Secretary of State Antony Blinken stated that the United States had a moral obligation to help them. Now, numerous organizations and members of Congress have raised concern about the denials.

Operation Allies Welcome transported tens of thousands of Afghans into the United States while requests for protection—usually in the form of humanitarian parole—were processed. This program included pre-screening and vetting at U.S. military bases, and then resettlement in communities throughout the United States with the assistance of refugee resettlement organizations. Virtually all the request for parole for those individuals were granted.

But those who remain in Afghanistan or in third countries face a much more difficult time in receiving parole.

Humanitarian parole is temporary permission for someone to enter the United States and remain there for a limited period for urgent humanitarian reasons or to serve a significant public benefit. Since at least 2017, U.S. Citizenship and Immigration Services (USCIS) said this may include people seeking protection from generalized violence and civil unrest.

Even though Afghans seeking protection should qualify for parole under those guidelines, many applications have been denied. USCIS now says that humanitarian parole for protection against harm is only available to people who can demonstrate individualized risk of harm. Making matters worse, the agency seems to be requiring corroborating evidence from a third party (such as an international human rights organization or a newspaper) that the Taliban will target the applicant. This can be particularly difficult to prove as many Afghans destroyed evidence of their cooperation with U.S. forces when the Taliban took control.

In December 2021, 113 organizations sent a letter to the Biden administration expressing their alarm about the significant problems Afghans were facing in trying to obtain humanitarian parole from USCIS. They argue that the current requirements for Afghans to establish eligibility for humanitarian parole are stricter than they were in the 2017 guidance, and that Afghans who were clearly in need of protection were being denied. That same month, Senator Ed Markey and Representative Seth Moulton led a bicameral letter to the administration, signed by 56 members of Congress, outlining similar concerns.

As both the letter from advocates and members of Congress point out, the standard that USCIS is applying is particularly onerous to Afghans who often fled their homes quickly and with little notice due to the United States’ abrupt withdrawal. Additionally, people are reporting extremely long wait times for their applications for humanitarian parole to be processed.

USCIS has also not created any special program for Afghans seeking parole. Individualized programs for granting humanitarian parole to specific groups of people in special circumstances have been a common practice for USCIS in the past, such as the 2014 Haitian Family Reunification Parole program, a 2010 parole program for Haitians fleeing the earthquake, and a program created in 2016 for Filipino World War II veterans’ family members.

However, USCIS has not committed to anything similar for Afghan nationals. Instead, the agency has left in place the current requirements for humanitarian parole requests for protection that are too stringent. As a result, an unknown number of Afghans have been stranded without targeted help from the United States.

The Afghans who were left behind after Operation Allies Welcome are in equal need of the temporary protection that entry into the United States can provide. Access to this protection in a timely manner via humanitarian parole is of vital importance and can be lifesaving. Even after the end of Operation Allies Welcome, the United States’ obligation toward the Afghan people has not ended.

Closing the door on the one path many of them have to temporary safety here is unacceptable. To fix this growing problem, the Biden administration should ensure that USCIS is not applying a heightened parole standard to Afghans and consider creating a targeted parole program.