On Tuesday night, President Biden will give his first State of the Union address to a packed House chamber. Other than, perhaps, an early nod to resettling Ukrainian refugees, those of us in the immigration reform movement don’t expect to hear much about our priorities until the big speech’s second half. While immigration won’t be the headliner, the president has an important opportunity to speak directly—and realistically—to the American people about an issue that has bedeviled both his predecessors and Congress for 36 years now. That’s the last time a president, Republican or Democrat, signed a meaningful immigration reform bill into law.

A year into the Biden presidency, we’ve seen the president succeed and fall short. Starting on his first day in office, Biden reversed several of the discriminatory visa bans of his predecessor, an urgently needed first step. In other areas of policy, there are miles to go – to restore our system of legal immigration, to rebuild a refugee program that had been gutted, to reform our approach to enforcement and detention, and to treat asylum seekers with the fairness and dignity every human being deserves.

While Congress dithers, the good news is that the president can take some first steps with just the stroke of a pen. Right now, through executive action, President Biden could do more to protect the DACA initiative and shield Dreamers from enforcement action. He could ensure no green cards go unused this year, while also speeding up work permits for all eligible immigrants. He could also expand humanitarian protections for Afghans, Ukrainians, and others around the world.

From policy, the president’s speech can then pivot to politics. Biden has already sent a comprehensive bill to Congress. His “U.S. Citizenship Act” would create a pathway to legal status for the undocumented, as well as clear visa backlogs and reduce long wait times for green cards. Of course, there is zero chance that Congress takes up such a reform bill before November – not as the typical election-year immigration discourse devolves even further into shouting matches about “open borders” and drugs. Still, Biden should take the opportunity to hold lawmakers’ feet to the fire. At the same time, he can also advocate for an approach different from the one that has failed immigration reformers before.

After all, we cannot keep fighting the same fights over and over and expect a different result. Our movement has learned, the hard way, that immigration isn’t just a political or a cultural or an economic issue. It’s all of the above. To succeed, we recognize the need to take the strategies that work and bring them to scale, while seeking out innovative new ideas.

During the State of the Union, the president can help by clearly defining our enemies: namely, the rising xenophobia and increasing polarization that make it more difficult to cut through the noise and reach more Americans. In the face of those headwinds, reformers know we need more powerful messages, a broader and more effective slate of messengers, and a way to leverage all the tools we have.

That means backing up our research and policy advocacy with a loud grassroots army, plus the lawyers who defend the right of immigrants to come and stay here. It means creating more welcoming communities, where immigrants and their neighbors can all succeed—and marketing those success stories to change attitudes. It even means going beyond politics, using arts and culture to show the value of diverse perspectives and reach people everywhere they are.

When immigrants succeed, everyone benefits. The House showed it understood that, when it included immigration provisions in the Build Back Better Act last year. One presidential speech won’t convince the Senate, but Biden can at least sketch out a path forward. And he doesn’t need to overpromise. He can start simply by stating an underappreciated fact about immigration: It isn’t just a problem to solve, or an ideal we struggle to live up to—it’s already a real-life asset in communities across the country.

Unlike Congress, the American people already agree it is past time to rewrite our immigration policies for the 21st century. Starting with a direct and clear-eyed assessment on Tuesday night, President Biden can use his bully pulpit to bring that day closer.

FILED UNDER: State of the Union 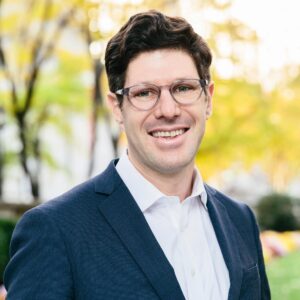 Jeremy Robbins is the Executive Director of the American Immigration Council. Previously, Jeremy spent more than a decade building New American Economy, the think tank and advocacy organization founded by Michael Bloomberg to make the economic case for smarter immigration policies, as NAE's first and sole Executive Director. Prior to that, Jeremy served as a policy advisor and special counsel in the Office of New York City Mayor, a judicial law clerk on the United States Court of Appeals, a Robert L. Bernstein International Human Rights Fellow working on prisoners' rights issues in Argentina, and a litigation associate at WilmerHale in Boston, where he was part of the firm’s team representing six Bosnian men detained at Guantanamo Bay, Cuba. Jeremy received a JD from Yale Law School and a BA in political science from Brown University.