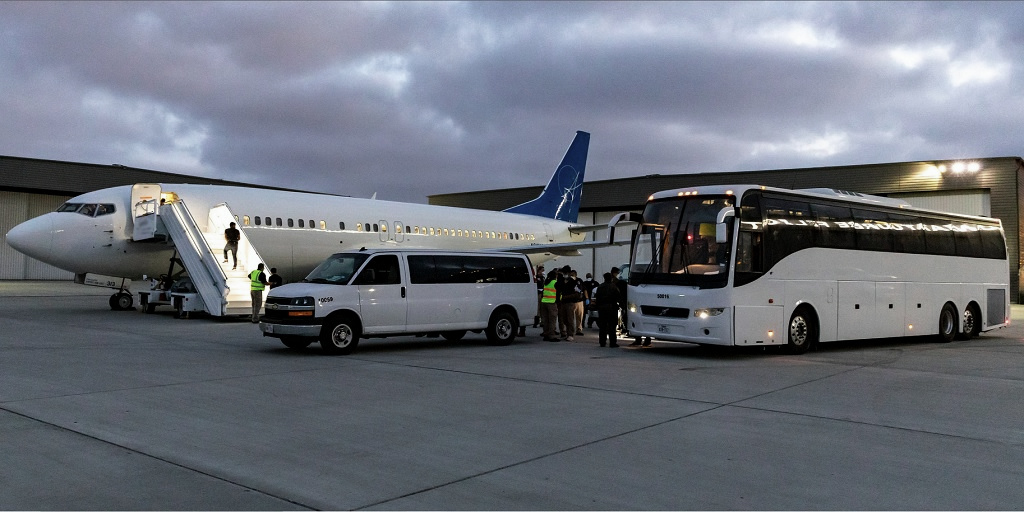 The flights of migrants from Texas to Martha’s Vineyard in September refocused attention on a phenomenon that had been unfolding for many months—the relocation of migrants by Republican governors to Democratic-led cities.

The sheer callousness of the flights to Martha’s Vineyard caught the attention of a public weary of border issues. Migrants were misled about their destination and wrongly informed that they would have access to resources such as jobs and cash assistance. Since then, groups have worked hard to reveal—through open records laws—the increasingly complex roles states play in the treatment of recently arrived migrants.

“Current plan is for event to occur next Wednesday … Will be more precise about ETA there as event approaches.” He later added, “No news from me between now and then is good news. Will let you know if otherwise.”

Another text message obtained by American Oversight revealed Texas Gov. Greg Abbott’s chief of staff, Luis Saenz, was in touch with Keefe and Uthmeier in early September, likely about the Martha’s Vineyard flights. American Oversight also continues to investigate money paid by the Florida Department of Transportation to the flight contractor, Vertol Systems. It is also tracking payments made from the Arizona and Texas governors’ offices to charter buses.

Much of the investigative work and media coverage highlight the state officials’ role in orchestrating the busing and flights. But the actions of federal immigration officials also can have far-reaching effects.

For example, U.S. Customs and Border Protection (CBP) granted humanitarian parole to some of the individuals sent to Martha’s Vineyard. This is a temporary form of relief that allows a person to remain in the United States for a short period of time. But if CBP only grants a short period of parole, it might expire before the individual can obtain another status. Though CBP describes the process for applying for and extending parole on its website, the criteria to extend humanitarian parole or grant “re-parole” is not publicly available or widely understood. This creates significant confusion for migrants about how to maintain their status.

Basic paperwork decisions made by CBP also can significantly impact a person’s case. It is unclear how CBP determines the mailing addresses to include in immigration documents. Some migrants have no contacts in the United States and lack a readily available address. The addresses listed by CBP for migrants flown from Martha’s Vineyard—including reporting, parole, and release documents—were in some cases incorrect or nonexistent.

This occurred even when migrants stated that they had no address in the United States. According to one of the lawyers representing the migrants, the Department of Homeland Security listed addresses of “random homeless shelters” in the migrants’ paperwork. The documents provided to the migrants required them to check in with an ICE office nearest to these incorrect addresses or be removed from the United States.

A recent Freedom of Information Act (FOIA) request filed with U.S. Customs and Border Protection (CBP) hopes to address these information gaps where the actions or inactions of federal officials have important consequences for migrants, including their ability to seek protection in the United States.

Obtaining records through open records laws—whether state or federal—can be a prolonged and frustrating process. But it is an effective method for holding government officials accountable. It is far more difficult for state and federal officials to deny or whitewash text messages or email communication when they have been provided through the state or federal open records process.

As states play a greater role in immigration policy and spend millions of dollars on buses and flights, open records laws will continue to play a crucial oversight role. Unless the public demands greater transparency, treatment of recently arrived migrants by officials at the highest level of state and federal government will remain secret.