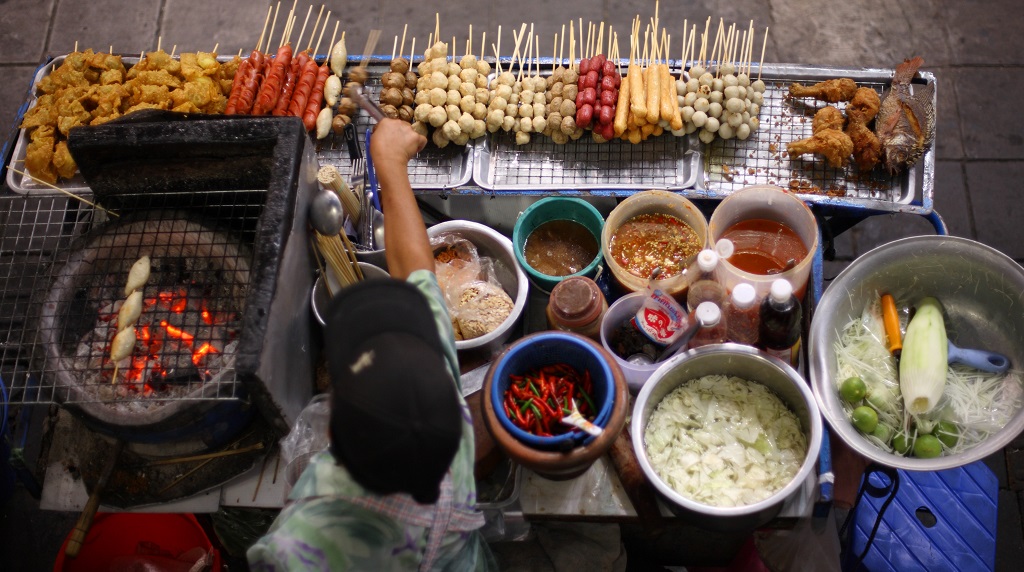 Written by John Wang, author and founder of the Queens Night Market

The singular mission of the Queens Night Market is to be New York City’s most affordable, diverse, and welcoming community space. That mission has been the north star of every organizational decision we’ve made since we launched in 2015.

From the start, I imposed one major price restriction and two curatorial parameters as guiderails in pursuit of my vision. No food could cost visitors more than $5 (although we started permitting some $6 exceptions a few years ago). By and large, anyone wanting to sell food at the event needed to offer something that they personally grew up eating (i.e., something “traditional” to their family and/or their culture). And no more than two vendors could represent the same country on any given night.

Over the years, two data points have emerged that I’m particularly fond of.

The first is that we’ve helped launch over 350 brand new businesses in NYC, each making their operational debut at the event. The second is that we’ve represented over 90 countries through our vendors and their food. The Venn-diagram overlap contains hundreds of new businesses started by immigrants, or their children, as a direct result of the Queens Night Market.

That said, I didn’t set out to make any kind of statement about immigrants or immigrant advocacy with the Queens Night Market. And to be honest, I’m intimidated by conversations that involve principles of sovereignty and the sanctity of borders. Nor do I have the expertise to wade into a debate about the impact of immigration on the local or national economy (although the American Immigration Council certainly does).

Rather, the Queens Night Market was really meant as a love letter to NYC, one that happened to be inspired by the night markets I fell in love with visiting Taiwan as a kid. In 2015, at a time when the three night markets in North America — one in LA and two in Vancouver — were primarily Asian-themed, the Queens Night Market was meant as a mosaic homage to the diversity that makes this city so incredible, so enchanting, and so enriching.

Of course, nationality and ethnicity are crude and clumsy proxies for diversity, single axes in a countlessly multi-dimensional spectrum. Of course, tracking nations-of-origin elides endless regional nuances within any set of borders. It also fails to account for so much geopolitical history, circumstance, persecution, and displacement.

Despite this, the Queens Night Market shows that immigrants — along with the cultural, artistic, and culinary traditions they bring — are marketable.

I struggled with how to phrase that last sentence without sounding like I’m commercializing or commoditizing immigrants or their journeys. I meant it in the sincerest, most complimentary Queens-Night-Market-Would-Not-Exist-Without-Them way.

The accolades we’ve received as a public event and as a dining destination exist solely on the shoulders of over 500 mostly immigrant entrepreneurs and hobbyists that have vended at the event. The tens of thousands of visitors we welcome on Saturdays are coming for the panoply of flavors and stories and firsts, even if some of their deep-seated views on immigration wouldn’t acknowledge that. Many of our vendors have been anointed by the media and food pundits as culinary torchbearers. Many more deserve such anointment.

I know hate crimes and millions of unseemly occurrences each day beg to differ, but it must be so hard to be xenophobic in this city. Incredibly taxing on the soul at the very least. I recognize that our core audience are New Yorkers, and that being a New Yorker — or someone who voluntarily visits — is self-selective. And I’m personally not above the giddy excitement of trying something far beyond my horizons: I was dejected when a food applicant from Papua New Guinea ultimately couldn’t source the ingredients they needed and had to withdraw, but also heartened when I found out that Mauritians from all over the tristate area were traveling here to support our vendor from Mauritius.

There’s a deeply resonant vibrancy and joy at the intersection of so many international arcs. It’s a pleasure and a privilege to soak it all up. I really think there are tens of thousands of easy smiles each Saturday night at the Queens Night Market precisely because so many cultural and socioeconomic barriers are broken, by design and by intent. So many borders are crossed as to render them innocuous as obstacles to community-building. There’s a unifying camaraderie founded on a multiverse of differences.

The diversity represented through immigrants can be a marketable and experiential asset that generates real dollars and really builds community. I know New York is a place where we already take immigrants and their contributions to our society seriously — there was even a $2b Excluded Workers Fund during the pandemic last year — so maybe the ethos of Queens Night Market can’t be exactly replicated everywhere. But it clearly can work and maybe it’s worth exploring in more places.

In 2015, inspired by night markets throughout Taiwan, John founded the Queens Night Market, an open-air night market featuring up to 100 independent vendors selling merchandise, art, and food and featuring small-scale cultural performances, all celebrating the rich cultural diversity and heritage of NYC and Queens. Now heading into its eighth season, the wildly popular and uniquely affordable event has launched over 350 brand new businesses in NYC and represented over 90 countries through its vendors and their food. It averages over 15,000 visitors on summer Saturdays and has welcomed over 2 million visitors since its inception. Along with his wife Storm Garner, he is co-author of the market’s award-winning cookbook The World Eats Here, which highlights delicious recipes and compelling stories from over 50 immigrant vendor-chefs. He also spearheads This is NY, a weeklong, citywide celebration of NYC’s immigrant history and heritage involving a coalition of over 40 cultural organizations and institutions. John is a graduate of the University of Michigan, Yale Law School and the Yale School of Management.”