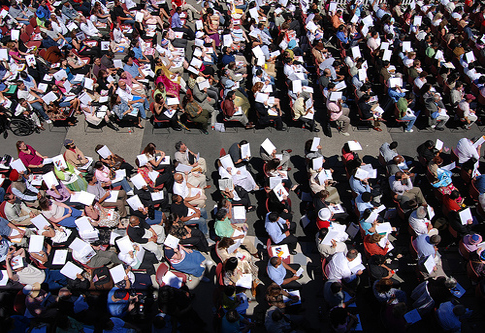 Over five hundred immigrants gathered on July 4, 2007 to take the oath of citizenship.

Last week the US Census Bureau projected that minorities will grow to become a majority by the year 2042. A recent New York Times article pointed out that the main reason for the accelerating change is significantly higher birthrates among immigrants.

While some fear that demographic shifts threaten American identity, research and experience has shown that today’s immigrants integrate into American society just as generations of immigrants before them. Immigrants are learning English, buying property, intermarrying, becoming U.S. citizens, and otherwise weaving themselves into the fabric of this nation.

Just a few measures of integration include:

Americans should celebrate the new projections of increased diversity and look forward to a stronger, brighter future.