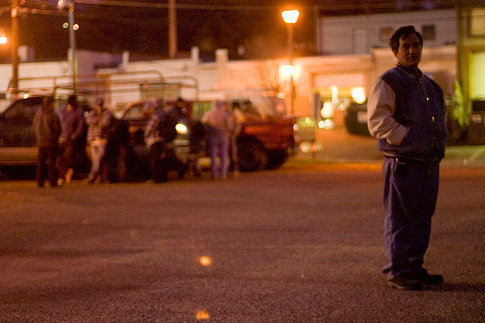 The impact of the current recession on immigrants and immigration is complex and far from common sense.  On the one had, fewer immigrants come and more go home since there are fewer jobs to be had. On the other hand, the absurdities of current enforcement policies drive many immigrants underground, to the long-term detriment of the economy.

Two recent articles illustrate these complexities.  The Miami Herald announced “Illegal Immigrants Going Home, and Local Labor Market at Risk,” and explained how the faltering U.S. economy has meant immigrants are less likely to find regular work, causing some immigrants -legal as well as unauthorized — to return to their home countries or move to other states because they are unable to find work here.  Experts warn that when the economy improves, there will be labor shortages in immigrant-worker industries.

At the same time, the Arizona Republic read “Illegal Workers Manage to Skirt Arizona Employer-Sanctions Law.”  Now that all Arizona employers are required to run new hires through the E-Verify federal employment verification system, some undocumented workers and bad-apple employers that hire them are discovering new ways to get around the system by hiring undocumented workers “under the table” for cash, which means they are not withholding income taxes from their workers’ paychecks and are not abiding by other labor laws such as paying minimum wage.

Arizona economist Elliott Pollack stated, “What you’ve done, because of that law, is taken tax-paying people“ and shifted them off the tax rolls.  Given the state’s $1.2 billion budget shortfall, the loss of tax revenue is a serious problem.  This isn’t a new insight.  The Congressional Budget Office estimated that if E-Verify were to be mandatory for all U.S. employers, it would cost the federal government $17.3 billion over 5 years in lost tax revenues because workers would shift to the underground economy.

We know that immigrants respond to economic conditions, so it should be no surprise that the volatile economic climate has had a profound impact on immigrant workers.  However the way that immigration laws are being enforced – such as E-Verify and raids – as well as the actions immigrants are taking, may prove to be even more harmful to the economy in the long run.  Expanding the underground, unregulated, untaxed economy will only come back to haunt us.

This shows the continued importance of pursuing immigration reform even amidst an economic downturn and slumping job market.  We must reform the legal immigration system and create one that is adapted to our economic realities in the 21st century so that we can avoid harming the economy even more.