Arpaio Only One Smiling in Maricopa County 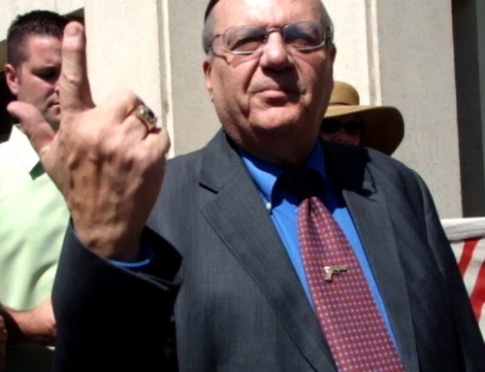 NOTE: This story first appeared in the Huffington Post.

Smile, You’re Under Arrest”–that’s the name of a new reality TV show starring none other than Sheriff Joe Arpaio of the Maricopa County Sheriff’s Office (MCSO). Yet Maricopa County citizens aren’t smiling as Arpaio’s tactics have wreaked a lot of havoc, and fought little crime.

Arpaio has transformed his police department into an immigration-enforcement agency, gaining international notoriety in the process. Armed with a 287(g) agreement with Immigration and Customs Enforcement (ICE) and a mandate to enforce immigration law, Arpaio has taken the pursuit of undocumented immigrants to “unconstitutional extremes.”

Voices from across the political spectrum – elected officials, media outlets, religious leaders, and community leaders — have been critical of Sheriff Joe, his tactics, and his impact. A July 2008 East Valley Tribune series of articles chronicling its investigation of the MCSO found that immigration-enforcement activities have been expensive, resulting in few key arrests and drawing law enforcement personnel away from investigating non-immigration-related crimes. The Sheriff’s Office created a $1.3 million deficit in just three months, much of it due to overtime. To staff the immigration team, Sheriff Arpaio pulled deputies off patrol beats and used them to run the human-smuggling unit. Tactics include racial profiling, sweeps of Hispanic neighborhoods, and stops for minor traffic offenses.

While MCSO has diverted resources to immigration enforcement, response times to 911 calls have increased, arrest rates have dropped, and thousands of felony warrants have not been served. Despite the time and energy spent on immigration enforcement, the Tribune found that MCSO has had little success building cases against violent immigrant offenders or those at the top of the smuggling rings. In 2006-2007, sheriff deputies arrested 578 illegal immigrants in the course of traffic stops, and of those, 498 faced a single charge of conspiracy to smuggle themselves.

Last week, the conservative Goldwater Institute has published a report documenting how the Maricopa County Sheriff’s Office, under the leadership of Sheriff Arpaio, has failed to serve and protect his community. Building on the East Valley Tribune investigation, the Goldwater Institute found that, though the MCSO budget has increased at four times the rate of the county’s population, violent crimes increased nearly 70%, and homicides increased 166% between 2004 and 2007 (excluding 2005 because MCSO did not provide data).

The Goldwater Institute also found that the MCSO has a bad habit of refusing to share crime statistics and other data, and in 2007, the county had to pay $38,000 in legal fees to a newspaper for withholding press releases. Perhaps most disturbing, despite reporting a high crime clearance rate, the MCSO reported that relatively few of the cleared cases – 18% — ended with an arrest. In contrast, Phoenix had a 78% of cleared cases ending in arrest.

What does this mean for the people of Maricopa County? In April 2008 Phoenix Mayor Gordon stated that Sheriff Arpaio has created a “sanctuary county for felons” by focusing on immigration and failing to pursue felony warrants. The Goldwater Institute concludes that “MCSO has lost sight of its most essential priorities,” because while while the Sheriff has succeeded in increasing his immigration-enforcement profile, he and his deputies have failed to provide their community with effective law-enforcement tactics and essential law-enforcement support services.

It’s becoming clear that the self-proclaimed “America’s Toughest Sheriff” and his over-the-top, media-grabbing immigration-enforcement methods are harmful to the people of Maricopa County and that local anti-immigrant policies are no substitute for comprehensive and substantive immigration reform at the national level.