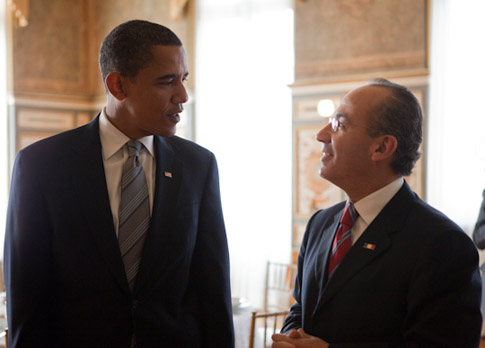 Obama told the Mexican president that his “administration is going to be ready on Day One to work to build a stronger relationship with Mexico.” The meeting’s agenda included discussions on NAFTA, border security and the economy, but a statement from Obama’s Transition Team affirms that a plan to fix the U.S immigration system was also the order of the day:

“President-elect Obama underscored his commitment to working with Congress to fix the broken U.S. immigration system and fostering safe, legal and orderly migration.  He expressed his strongly held view that immigrants should be treated with dignity and that the immigration debate should not be a vehicle for vilifying any group, and that our two countries need to work more effectively to stop the flow of illegal immigration into the United States.”

Bishop John C. Wester, Chairman of the U.S. Conference of Catholic Bishops, issued a strong statement yesterday urging President-elect Obama and Mexican President Felipe Calderon to “work together to end abuses against migrants-both in the United States and Mexico-and to address “push” factors that compel migrants to undertake dangerous journeys to the United States.”

Similarly, Congresswoman Nydia Velazquez of New York and Congressman Luis Gutierrez of Illinois met with clergy and immigrants at a rally in Harlem Saturday calling on President-Elect Obama to act quickly and issue an executive order to stop immigration raids and deportation that are tearing families apart.

How and when the Obama Administration will move on comprehensive immigration reform, no one will say. But recent Congressional movement on the State Children’s Health Insurance Program, which would give healthcare to legal immigrant children instead of making recent immigrant children wait five years for coverage under the current law, could be one of the first pieces of positive immigration legislation passed in the Obama Administration.