A Secretary of Labor Who’ll Work for All Workers 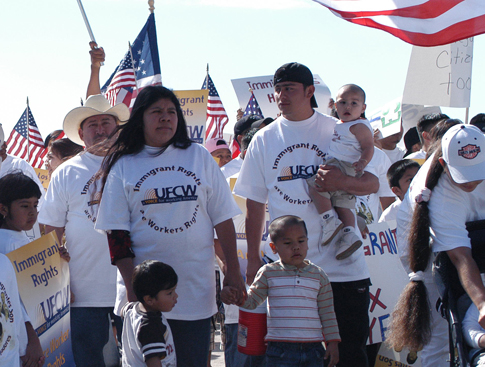 Working people finally have a fighter in their corner, with Hilda Solis almost certain to be confirmed as the next Secretary of Labor. The California Congresswoman has been a loyal champion for working families, fighting for the rights, interest, and safety of all workers-both immigrant and native-born.  Solis has, as Marie Cocco puts it, “a record of unstinting loyalty to those who work and want to work, and who wish to receive in exchange a decent wage and a measure of dignity.”

As the child of immigrants and the first to attend college in her family, she knows how important it is that everyone who works hard in America has the opportunity to achieve the American Dream.  She understands that all workers make hard choices and tremendous sacrifices in order to support their families and build a better future and that it’s the interests and lives of these working people that should be at the heart of any reform of our immigration laws.

That’s why we’re confident that Solis will continue to support meaningful immigration reform, and will oppose unproductive and devastating workplace raids like those the Bush administration used to camouflage the cracks in our broken immigration system. A Los Angeles Times Article pointed out:

Immigrant activists revitalized the American labor movement in the final decades of the 20th century. Solis, 51, has strong ties to that movement.

Certainly, her record of work for UFCW members alone is proof positive that she doesn’t just talk the talk. She’s a veteran when it comes to walking the walk for workers. Solis applauded President Hansen and the UFCW for exposing the detrimental impacts of workplace immigration raids. Her own background as the daughter of a union shop steward from Mexico and an assembly line worker from Nicaragua has led her to speak out on the immigration issue and stand up for all working families, even against powerful interest groups and big business.

Congresswoman Solis has proven, time and time again, that she puts the interests of all working people, both immigrant and native-born first-and there is no doubt she will continue to do so as Secretary of Labor. As President-elect Obama said, “Under her leadership, I am confident that the Department of Labor will once again stand up for working families.”

We at the UFCW agree, and urge that she be confirmed to the position that she is so eminently qualified for. It’s about time we had a Secretary of Labor who works for all workers.