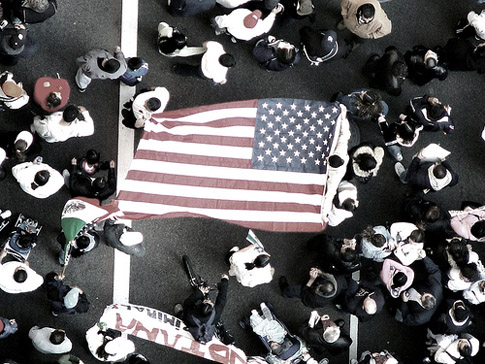 Amidst a deep economic recession and a growing climate of fear and alienation within immigrant communities, many states, cities and counties that “plunged into the immigration debate are having second thoughts,” reports USA Today.

In states like Texas, Alabama and elsewhere, hard-line immigration legislation has been repealed or modified by lawmakers that have come to terms with the fact that the time and expense associated with implementing such policies has made their anti-immigrant position less popular among their constituents.  In Iowa and Utah, legislators are proposing similar reversals.  Accusations of racism and a surge in anti-immigrant hate crimes are also cited by USA Today as reasons for the about face.

“For us to spend our time pitting neighbor against neighbor was a sacrilege…We’re just a tiny little city and we were getting a lot of negative publicity.”

Several other examples throughout the country were also identified by USA Today:

Several public figures are also starting to change their tune on immigration-such as New York’s new Senator, Kirsten Gillibrand who after “learning more” and “expanding” her “view,”  has recently indicated that she’s rethinking her hard-line approach to immigration and opting for more pragmatic solutions.  Even Corey Stewart, Prince William County’s [Virginia] infamous Board of Supervisors Chairman who once set the gold standard for local law enforcement “crackdowns” on the immigrant community has taken a step a back in response to “plummeting home values, statewide Republican electoral defeats and widespread economic instability.”

Yet there are still some places that are desperately clinging to their costly and ineffective policies.  Farmers Branch, Texas is still willing to spend $1.6 million to fight lawsuits challenging its effort to prevent undocumented immigrants from renting apartments and houses-1.5% to 2% of the city’s budget.  Meanwhile, residents of Carrollton, Texas want their city to do what it can under federal law to regulate undocumented immigration, but they don’t want increased taxes or cuts in services to pay for it-a fiscally unfeasible demand.  Maricopa County in Arizona has quite possibly received the most scrutiny for rising crime rates, racial profiling, and creating a $1.3 million deficit in just three months as a result of its implementation of the 287g program-which gives local law enforcement the authority to enforce federal immigration laws.  Yet, under the leadership of media hound Sheriff Joe Arpaio, the county continues to be a site for the exploitation of “widespread frustration with our current immigration system for political and publicity goals.”

Yet, while many communities are taking it upon themselves to address immigration as they see fit, it’s up to Washington to address the issue once and for all.  President Obama and congressional leaders need to enact realistic immigration reform legislation so that law enforcement and criminal justice resources can start being diverted away from penalizing non-criminal immigrants and terrorizing immigrant communities and towards getting our country back on its feet.