Immigration Reform Gets Boost from a “Higher Power” 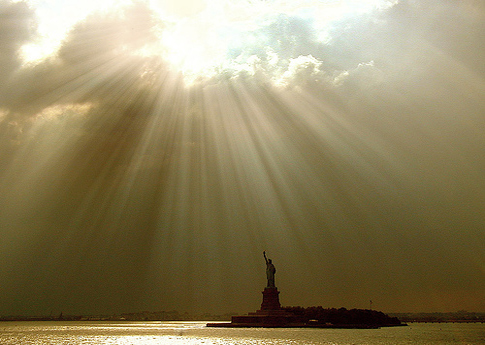 A broad interfaith coalition has begun a series of nationwide prayer vigils to raise awareness of the need for comprehensive immigration reform. “Prayer, Renewal and Action on Immigration” is the name of the campaign launched this week with help from U.S. Reps. Luis V. Gutierrez and Mike Honda. The coalition has also prepared a platform on immigration, signed by over 500 congregations from coast to coast, which asks the new President and Congress to uphold family unity, along with creating a process for earning legal status, implementing worker protections, restoring due process and facilitating immigrant integration.
Reverend Jim Wallis, president and Executive Director of Sojourners said:

“The often politicized and divisive debate around immigration calls for a deeper dialogue shaped by our best religious values of compassion, mercy, justice, and tolerance. The faith community has a clear responsibility in leading this conversation and helping those who are most vulnerable due to their immigration status.”

Prayer vigils in cities impacted by ICE enforcement raids are particularly poignant. In Postville, Iowa, home to the most devastating raid in U.S. history, the Idaho Press-Tribune reports on a local prayer vigil. Pam Baldwin, executive director for the Interfaith Alliance of Idaho said:

“There are constant raids yet today. It hasn’t stopped. People are being picked up and taken from their families. It’s happening in Idaho and it’s happening around the country. We believe praying is good but we have to take action as well.”

The nationwide prayer vigils have so far garnered tons of press attention, which will help to create awareness and momentum for a new day for immigration reform.