Pelosi Joins the Hispanic Caucus’ Call for Reform, Not Raids 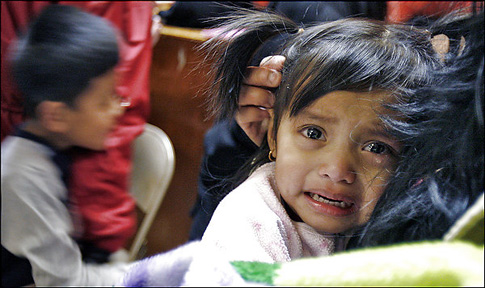 This past weekend, House Speaker Representative Nancy Pelosi (D-CA) took a stand on immigration raids and met hundreds of families Saturday evening at a church in San Francisco’s Mission District to demand an end to deportations and the separation of families.

Pelosi’s stop was part of a larger, 17-city national “Family Unity” tour led by leaders of the Congressional Hispanic Caucus in response to immigration raids.  An estimated 3.1 million US citizen children have at least one parent who is undocumented.  Many others have at least one parent who is a permanent legal resident who can be subject to deportation for minor legal infractions or errors while filing for a change of immigration status. Every year thousands of children are either separated from a parent who has been deported, or forced into exile.

Groups such as the California Minuteman-a designated hate group with ties to white supremacists–argue that the “head of the household is breaking up the families when he crosses into the country illegally.”  However, most men and women are motivated to cross the border to provide for their families and secure a better future for themselves and their children.  The majority of these immigrants are hardworking, productive members of society whose children also experience pronounced upward mobility over time.  Together, these families forge a brighter future for our nation and economy as a whole.

“Who will pay for the support of the U.S.-citizen child if both parents are deported? Who will support the child if the remaining parent cannot find work and adequate child care?”

The children who are left behind in single parent households suffer both emotionally, and financially. Many join the welfare rolls.  Some have to leave school to go to work.  Others give up college.

“…that opportunity, that determination, that hope has made American more American…taking parents from their children … that’s un-American,” said Nancy Pelosi. “Across America, parents and children, husbands and wives, are being torn apart by a system that values quotas over family values and which undermines our economic security in a time of crisis,” added U.S. Rep. Luis Gutierrez (D-Ill).

Gutierrez is also trying to give raid and deportation victims a face and a voice, highlighting stories disturbingly similar to that of Teresa Figueredo-a young mother who awoke at 6am one morning to the sound of immigration agents pounding on her door.  Even though she is married to a U.S. citizen and was in the middle of adjusting her immigration status, Teresa was deported to Argentina.  She is the mother of a 3-year-old daughter and was six months pregnant at the time.

“I thought we were doing things right, but one day they come and knock on your door and take you away from your family. … We have pending paperwork but nobody cares,” Teresa told the News-Press by phone from Buenos Aires. “I’m sure there’s bad people that need to be taken care of but she doesn’t drink or do drugs, she’s church-going and she learned to speak English,” said her husband, Paul Gramaldi.  “I just don’t get it. We’re all immigrants. Let’s work this out,” he pleads.

A shred of hope exists for Teresa and her family with the possible passage of the Child Citizen Protection Act, recently reintroduced by Rep. José Serrano (D-NY). The bill would allow immigration judges to take family situations into account in deportation proceedings.  Current immigration law provides no option to the presiding judge in a deportation case to consider the harm of separation of the child who is a US citizen from their parent.  Yet, in the end, the real problem is that the U.S. immigration system is outdated by 20 years. What we need is reform, not raids.  We need immigration laws that meet the reality of 2009, reduce illegal immigration, and strengthen the rule of law by replacing the chaos and exploitation of undocumented immigration with the control and regulation of an orderly and humane system.