Pay Attention to that Man behind the Curtain 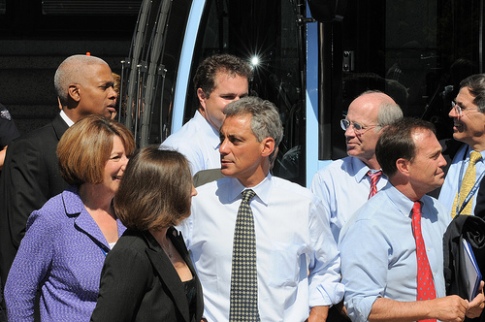 As right-wing political pundits questioned the Obama administrations’ renewed commitment to comprehensive immigration reform yesterday, the Wall Street Journal pulled back the curtain to reveal White House Chief of Staff, Rahm Emanuel, as a new committed ally in the fight for immigration reform.

Billed as a brilliant political strategist by Janet Murguia of the National Council of La Raza (NCLR), Rahm Emanuel has taken a new direction in setting the political stage for comprehensive immigration reform to pass. Most recently, Emanuel had a heavy hand in ushering the State Children’s Health Insurance Program (SCHIP) bill through Congress. SCHIP is a program which extends health care benefits to legal immigrant children and pregnant women.

While Mr. Emanuel once predicted that comprehensive immigration reform wouldn’t be considered until the second term of a Democratic president, he now says conversations on the issue will begin this year to lay the groundwork for possible action in 2010. The issue is also likely to arise next week when President Barack Obama travels to Mexico to meet with President Felipe Calderón.

Part of Rahm Emanuel’s new immigration strategy is based on the sheer numbers and impact of the Latino vote, according to the Wall Street Journal:

Mr. Obama, who pledged during his campaign to act on immigration, won with strong support from Latino voters. While Democrat John Kerry won 53% of the Hispanic vote in his 2004 run, Mr. Obama took 67% in 2008.

Many of yesterday’s critical headlines drew from White House Press Secretary Robert Gibbs’ briefing statement that President Obama’s commitment to immigration reform is a priority that Obama had already promised on the campaign trail. But what is most notable, however, is that the Obama administration actually intends to keep that promise—“the President believes that there’s only one way to solve this problem, and that is through comprehensive immigration reform.”

Everyone on both sides of the aisle admit that our immigration system is broken, unfortunately, the Lou Dobbs of the media love to put words like “open border blanket amnesty” in the mouths of people who want a fair, common sense and comprehensive solution to the 12 million undocumented immigrants who live in this country.

Fortunately, Rahm Emanuel and the Obama administration understand that comprehensive immigration reform is not only the right thing to do, it’s also the politically and economically smart thing to do.