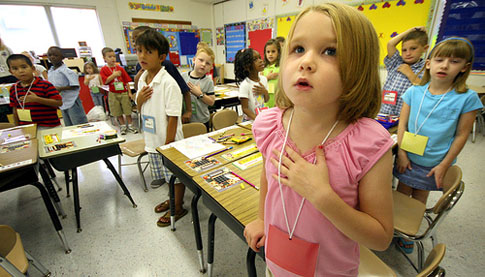 Yesterday, the Pew Hispanic Center released new data on undocumented immigrants in the United States that highlights not only the absurdity of the “deport them all” approach adopted by many anti-immigrant activists, but also the social and economic benefits that would flow from a legalization program for the undocumented. According to Pew, there were 11.9 million undocumented immigrants in the country in 2008, including 1.5 million undocumented children. Moreover, there were another four million native-born, U.S.-citizen children with undocumented parents. Some of these U.S.-born children have already faced the nightmarish dilemma that all of them would face under a “deportation only” scenario: leave behind the country of their birth to stay with their parents, or try to find some way to stay in the United States without their parents.

Leaving aside the Kafkaesque question of whether it is “better” to separate U.S.-citizen children from their undocumented parents or deport the lot of them, it is clear that trying to round up and remove this many men, women, and children from the country would be a monumentally expensive humanitarian catastrophe. The Center for American Progress estimates that it would cost somewhere between $206 billion and $230 billion over five years to deport 10 million people. This doesn’t even begin to count the economic costs to businesses that would experience the disappearance of workers who make their products and consumers who buy them. And no dollar figure can capture the damage done to families, schools, and communities torn apart by detentions and deportations.

As the IPC notes in a new research review, legalization would remove this barrier to upward mobility.  Allowing undocumented immigrants to earn legal status would also enable them to earn higher wages. And workers who earn more money spend more of it in U.S. businesses and provide more tax revenue to federal, state, and local governments. This sounds more like a recipe for economic recovery than the deportation-only option of spending hundreds of billions of dollars trying to take workers, consumers, and taxpayers out of the U.S. economy.