Crackdown on Bad Seed Employers a Step in the Right Direction 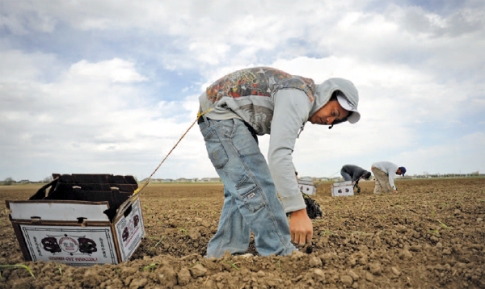 This week, the Denver Post watch underworld rise of the lycans in HD highlighted the case of five undocumented migrant farmworkers who were imprisoned in squalor at the hands of their smugglers, Moises and Maria Rodriguez. The Mexican farmworkers, who were found working the fields of Northern Colorado, lived in a fenced-in compound on the edge of the Weld County in vile makeshift houses that the Colorado Department of Labor inspectors deemed “uninhabitable.” According to reports, the men piled into an old school bus and rode to a farm field, then put in 12 hours planting, or weeding, or harvesting vegetables. The smugglers paid them a mere $7 an hour, but only allowed the workers to keep $2 an hour.

It was a veritable prison…a place where Rodriguez held them in a form of debt bondage. For example, Rodriguez contended that each man owed him money for smuggling them into the U.S. — he put the price somewhere between $1,100 and $1,300. He charged them $100 a month for rent, $96 a month for a transportation fee, and money for bathroom cleaning — even though most of the toilets didn’t work and the one that did was filthy. He charged them Social Security taxes but didn’t turn that money over to the federal government.

This case, which many described as “unprecedented,” highlights the need for comprehensive immigration reform which will allow for smarter worksite enforcement and a focus on penalizing real criminals—human smugglers and bad seed employers—who currently benefit from our dysfunctional immigration system. Punishing employers who exploit migrant workers would be a step in the right direction.

This past week, Senator Dianne Feinstein (D-CA) and Congressmen Adam Putnam (R-FL) and Howard Berman (D-CA) introduced into Congress the Agricultural Job Opportunities, Benefits, and Security (AgJOBS) Act, legislation that lays out a path to legalization for unauthorized farmworkers who meet certain eligibility requirements and reforms the H-2A temporary farmworker visa program.  AgJOBS is the product of a careful compromise between employers and workers and should serve as a blueprint for broader immigration reform that encompasses all other sectors of the economy.

Our dysfunctional immigration system, for years, has focused on large scale worksite raids and other measures that target workers rather than criminals who prey upon the broken system.  Smugglers, traffickers, and unscrupulous employers are among the very few who profit from the current system, while it ends up harming most Americans.   We clearly need to fix our system and create a practical, workable, and fair legal immigration system for the 21st century.

Clearly, the large settlement these undocumented migrant farmworkers received is an anomaly, but until we have comprehensive immigration reform which provides a path to legalization for these exploited migrant workers as well as rights and a living wage for all workers, we cannot restore due process and the rule of law to our immigration system.