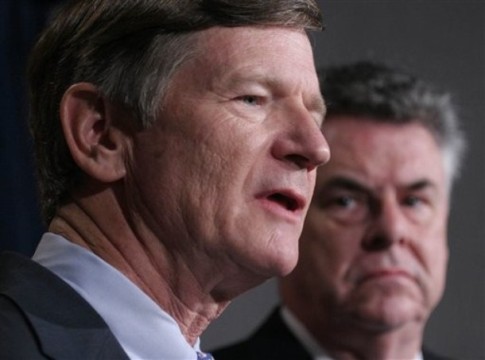 Representative Lamar Smith, the top ranking Republican on the House Judiciary Committee, has been making the rounds again with astounding claims regarding immigrants and Social Security. Based on what he has described as “hard data” released by the Social Security Administration (SSA), Rep. Smith’s analysis is inaccurate and his conclusion wrong.

To buttress his case against legalization, Rep. Smith asked SSA actuaries to produce some hypothetical examples of undocumented immigrants’ Social Security contributions and what they might receive in benefits if they were legalized. Then, apparently not content with the answers they gave him, he twisted them beyond recognition. Rep Smith disregards SSA’s Chief Actuary, who cautions that, if a legalization program were enacted, the various examples he asked for would apply only to a relatively small portion of undocumented workers. Then, rather than using the examples defined by SSA as most typical (in which undocumented workers earn $17,000/year), Rep. Smith focuses exclusively on immigrants with very lowest earnings ($9,000/year). He inexplicably places atypical earners into fictionalized couples holding characteristics that SSA’s Chief Actuary describes as “increasingly uncommon” and … voila! … he produces numbers that would indeed be scary if they were true.

So, what’s the truth? Legalizing undocumented immigrants sooner rather than later would help the Social Security system because it would enable these immigrants to earn more income and pay even more taxes. But don’t take my word for it. Read the letter SSA’s Chief Actuary sent to Rep. Smith for the complete picture. The Chief Actuary’s more balanced view is consistent with other official assessments. The Congressional Budget Office estimated that the 2007 Senate comprehensive immigration reform bill would have resulted in a $56 billion net increase to the fund over the next 10 years. SSA itself estimated that implementation of the 2006 Senate-passed bill would have improved the long-term solvency of the Social Security trust fund.

Of course, to recognize that immigrants help Social Security is not to say they are its saviors. Indeed, the impact of legalization on Social Security’s long-run balance is positive, but in the larger scheme of things, fairly negligible. Reforms are needed to ensure that the retirement system realizes its promise to all workers who have contributed. So that we may rise to the challenge, the public and its Representatives in Congress need accurate information—not scapegoating that diverts attention from the real problems we must face and solve together.