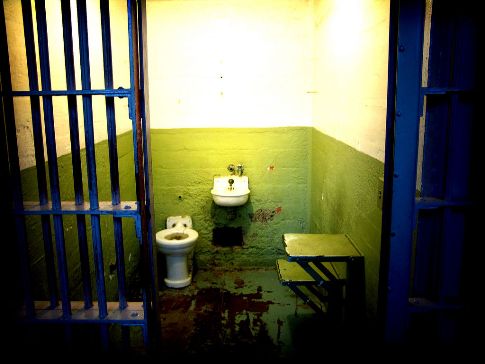 Senators Robert Menendez (D-NJ), Kirsten Gillibrand (D-NY), and Edward Kennedy (D-MA) took action today to reform the Department of Homeland Security’s ever-growing immigration detention system. The need for reform could not be any more clear: several recent reports have documented both the poor conditions in detention facilities and violations of detainees’ due process rights. A delegation from the Inter-American Commission on Human Rights called conditions “unacceptable” after visiting facilities in Florida and Texas. The National Immigration Law Center, the ACLU of Southern California, and Holland & Knight law firm published a system-wide report on the federal government’s compliance with its own minimum standards, finding “fundamental violations of basic human rights and notions of dignity” and calling for a halt to any further expansion of the current detention system.

Senator Menendez and Gillibrand’s Strong STANDARDS Act bill would require the Secretary to issue rules regarding detention conditions in 15 different areas, including medical care, access to telephones, the treatment of vulnerable populations, and the use of force. Oversight and accountability would be enhanced through requirements that the Secretary issue rules regarding enforcement, report all detainee deaths, and appoint a Detention Commission responsible for investigations and reporting on compliance.

Ironically this report by NILC, ACLU, and Holland & Knight followed a DHS announcement stating that it will not issue rules formalizing detention standards. The existing internal guidelines, DHS claims, are enough. DHS seemingly would prefer that Congress ignore the problem of immigration detention. But how can Congress ignore not only this week’s report but over a dozen other reports from trustworthy organizations or the government, itself, on the poor and substandard conditions of immigration detention? How can Congress ignore repeated news stories of people dying in detention—like Francisco Castenada who repeatedly complained of a small lesion on his body but received no care for months and then was diagnosed too-late with a lethal cancer that killed him in 2008? Reform is urgently needed.

Another fundamental problem is that detention has become the one-size-fits-all solution. Rather than carefully screening people before throwing them in detention, DHS has adopted a default detention policy and this year is expected to hold 440,000 persons, more than tripling the number of people detained since 1997. Most detainees have no criminal record and pose no threat to our communities. Many have legal status or even U.S. citizenship.

Earlier this week the San Francisco chronicle reported several instances of U.S. citizens being wrongfully detained. One man, Hector Veloz, is a U.S. citizen and the son of a decorated Vietnam veteran. But in 2007 immigration officials mistook him for an illegal immigrant and locked him in an Arizona prison for 13 months. Even after he proved his case before a judge, the Department of Homeland Security appealed the matter keeping him detained for another 5 months until he won on appeal and proved DHS wrong again.

A second bill, the Protect Citizens and Residents from Unlawful Detention Act, introduced by Senators Menendez, Gillibrand, and Kennedy, requires ICE to take certain steps during enforcement activities to ensure that citizens and legal residents stay out of the detention system. Such steps include providing all persons apprehended by ICE with prompt access to telephones and a list of free or low-cost legal aid. The bill also prioritizes release options for people with legitimate claims to U.S. citizenship and vulnerable individuals, such as pregnant or nursing women, families with children, and asylum seekers.

Most undocumented immigrants have families, jobs and homes in the United States – they and other vulnerable populations are unlikely to pose a flight risk while awaiting an immigration hearing. Parole, bond and other alternatives are not only more humane but less costly. Why pay a dollar when you can pay a dime? That the dollar is spent on locking up families with children, torture survivors, and pregnant mothers is just one of many signs that our entire immigration system—including the detention system—is broken and in need of comprehensive reform.

Locking people up will not solve the problems with our nation’s immigration system. Instead of more detention we need more smart solutions to a complex problem. Soon Congress and the American people will wake up and realize that detention is costing us billions and hurting thousands of people and our communities but ultimately failing to provide real answers.