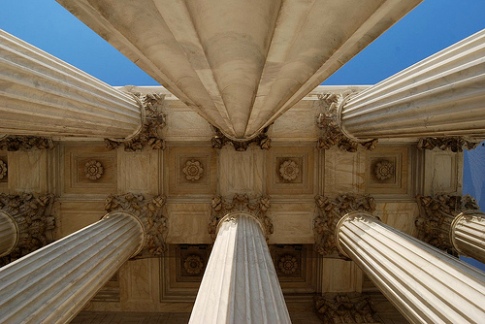 Today, the United States Supreme Court opens its October session. Among the cases it will hear this term, two may have a significant effect on immigrants. The first case involves the intersection of the criminal justice system and immigration and the important role that lawyers play in safeguarding the rights of immigrants. The second case deals with immigrants’ access to federal court review—review which provides necessary oversight of government decision-making in immigration cases. These cases present the Supreme Court with opportunities to reaffirm that immigrants must be afforded fair process and a meaningful opportunity to be heard.

The first case, Padilla v. Kentucky, is brought by Jose Padilla, a lawful permanent resident who has lived in the United States for almost 40 years and who served honorably in the U.S. military in Vietnam. The state of Kentucky charged him with drug offenses, and his criminal defense lawyer advised him to accept a plea bargain. His lawyer said that if he accepted the plea bargain, he would not have to worry about his immigration status. Unfortunately, this advice was wrong: the plea Mr. Padilla accepted meant he was deportable, without any option to remain in the U.S. Despite the lawyer’s wrong advice, the Kentucky courts refused to give Mr. Padilla an opportunity to withdraw the plea. Now, the Supreme Court has stepped in; it will consider two questions: (1) whether a criminal defense lawyer must advise an immigrant client about the potential immigration consequence of a plea bargain, and (2) whether a defendant should be allowed to reopen his criminal case where the attorney gives misadvice about the immigration consequences of a plea bargain.

The Court should answer “yes” to both questions. Given the stakes, namely potential deportation and in some cases, permanent banishment from the U.S, defense attorneys should be required to advise immigrant defendants about the potential immigration consequences of plea bargains. In many cases, the immigration consequences are far more severe than any criminal penalty the court may impose. Recognizing this, the American Bar Association and the National Legal Aid & Defender Association have endorsed attorney standards requiring investigation and advice about the immigration consequence of plea bargains. Criminal courts also must allow immigrant defendants to withdraw their plea agreements where counsel failed to provide this advice or provided incorrect advice. Such recourse brings integrity to the criminal justice and immigration systems and ensures that immigrants who reasonably rely on advice from their lawyers are not unfairly held accountable for mistakes made by lawyers.

In the second, case Kucana v. Holder, the Court is considering whether Agron Kucana, an asylum seeker from Albania, should be allowed to seek federal court review of a government decision depriving him of the opportunity to present his asylum claim. Mr. Kucana filed a motion to reopen—a procedural mechanism to bring his asylum claim before an immigration judge—arguing that because of changed conditions in his home country, he feared that he would be persecuted if deported. The immigration agency (namely, the immigration judge and the Board of Immigration Appeals) denied his motion, but according to Mr. Kucana, the government ignored key evidence that corroborated his claim. He then went to the Seventh Circuit Court of Appeals (based in Chicago) and asked the court to review the government’s decision. The Seventh Circuit refused, saying that the government’s decision is not reviewable—in other words, the agency has unfettered discretion over potentially life and death decisions. Now the Supreme Court will decide whether the Seventh Circuit was right. Significantly, even the government, the opposing party in the case, refuses to defend the Seventh Circuit’s decision. It submitted a brief to the Supreme Court in which it agrees that Mr. Kucana should have his day in court.

The immigration agency, just like everyone else, makes mistakes and sometimes just gets things plain wrong. For asylum seekers like Mr. Kucana and other persons facing deportation, a government error can lead to wrongful deportation and even persecution in one’s home country. Federal court review serves a necessary oversight function and provides a measure of protection against government error. The Supreme Court should find that Mr. Kucana and other immigrants who have filed motions to reopen have access to federal court review.

Importantly, the underlying decisions in both of these cases conflict with favorable decision from other courts, and thus an adverse decision in either case has the potential to reverse this favorable law. This is a particularly acute concern in Kucana: the Seventh Circuit’s decision conflicts with all the other federal courts of appeals’ decision that have considered whether motions to reopen are reviewable and the Supreme Court’s decision will likely resolve the issue for all the federal courts. This fact heightens the stakes in these cases and serves as reminder of the gravity of Supreme Court review.