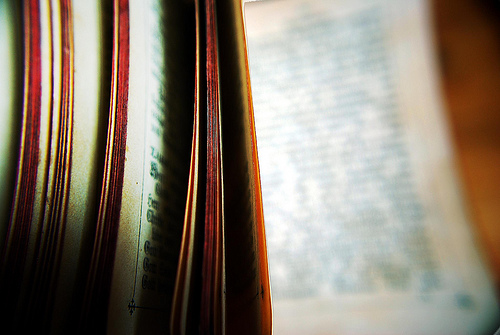 For many years now, religious leaders and diverse faith groups have contributed much to the ongoing immigration debate. Grounded in faith and good works, the faith community has been and continues to be steadfast in their outreach to immigrants through a myriad of support and service programs, faith rallies and support of those in need. That being said, there are restrictionist groups who would rather sully the debate by co-opting faith-based terminology and tease anti-immigrant agendas out of Scripture.

Yesterday, the Center for Immigration Studies (CIS) held such a panel discussion on the immigration debate from a faith-based perspective. CIS Fellow, James R. Edwards Jr., an apparent biblical scholar, was on hand to discuss his recently released report, A Biblical Perspective on Immigration Policy—the latest in a series of CIS publications on faith which writes off “compassion” as the practice of “religious elites” and attempts to speak for the majority of “rank-and-file” Christian laity who apparently “oppose legalization and support enforcement of immigration laws.” Edwards’ report attempts to examine the biblical role of civil government.

The problems, however, with the report’s exploitation of Scripture to affirm an anti-immigrant agenda, as Dr. M. Daniel Carroll Rodas, a Professor of Old Testament at Denver Seminary, points out, are its casual misuse of biblical data, weak framing and statements antithetical to the very text supposedly supporting them. Dr. Carroll’s response to Edwards’ report reveals a substantial lack of fact, scope and at best a loose interpretation of historical context.

Edwards’ report lacks biblical expertise, theological scope, ecclesiological awareness and consideration of the sacrificial call of Christ to serve the needy. [The report also] contains misinformation, caricature, and pejorative language—the very elements that do not lend themselves to a constructive or civil debate on such a sensitive and complex topic.

For starters, Dr. Carroll questions the very framing of the report which opens with a passage from Romans 13 beginning, “Everyone must submit himself to the governing authorities, for there is no authority except that which God has established.”

Edwards’ argument is that this passage [Romans 13] indicates that government authorities have been established by God and that its citizens and outsiders are to submit to its laws. Unauthorized entry and residence in this country, therefore, cannot be supported. To begin at Romans 13, however, has the potential to carry with it the assumption that the government is inherently good and should not be questioned, nor its laws challenged.

A better framing, Dr. Carroll argues, would be Genesis 1-2 which provides a less defensive focus on the creation of humanity and renders the worth of all humans—including immigrants—equal “in the image of God, their potential to contribute to society, and the physical needs that can be met within a land of more resources and opportunities.”

There are also several problems with the treatment of biblical material. In biblical times, for example, boundaries, citizenship, and nations were not like today’s realities. In the ancient world there were city-states, nomadic peoples, empires of various sizes, coalitions of small states with varying degrees of shared governance, and individual nations. Borders and jurisdictions did not function as they do now. Democracy did not exist; all governments were in some measure authoritarian, centralized, and inextricably interconnected with religious ideologies and rituals. People were concerned about borders, but one should be careful not to project how modern states control borders with how these may have been handled so long ago.

Instead, Dr. Carroll offers a less narrow perspective on the purposes and goals of immigration policy—one with the “possibility for a tone of compassion and mutual respect, [one that suggests] the country might review its mission as one of serving the vulnerable within the limitations of its possibilities.” While recognizing the importance of authority, laws, borders and the personal responsibility of immigrants, Dr. Carroll quotes, as Edwards does ironically, that “the love of neighbor is connected to the love for the sojourner (Lev. 19:18, 33-34)” but, more importantly and accurately, gleans from the same quoted passages that the “issue is love and compassion more than legal rectitude.”

For many, the principles of their faith drive them to social activism of all kinds and no one—liberal or conservative—has an exclusive claim on the Bible or its interpretation. But what’s troubling about the CIS report is how thinly veiled an effort it is to invoke the Bible as a source of authority for anti-immigrant policies. Immigration policy is about regulating the flow of immigrants into this country, the demands of our economy and the machinations of how we go about processing that flow. The faith community comes to the immigration issue from an important perspective grounded in compassion and justice, and that is a valuable contribution to the debate. As with any other contribution, though, arguments deserved to be tested and analyzed. Dr. Carroll demonstrates that the CIS report misses the mark.