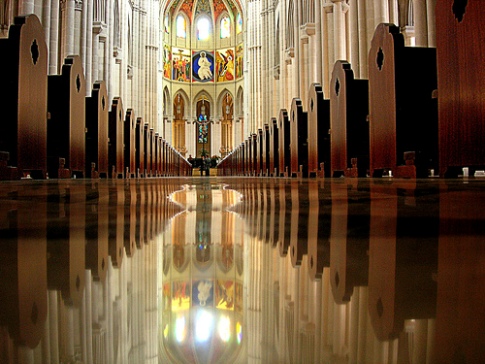 Nativist groups are pulling an old strategy out of their play book as they attack members of the clergy. This tired exercise includes identifying a constituency that is in support of solving our nation’s immigration problems (currently the religious community), coordinating with other like-minded groups to disseminate faulty arguments (this time using the bible to condemn immigrants), claiming to be acting in the name of someone other than your self (in this case the American worker), and finally going after them with all the fervor you can muster to convince them that the bible preaches against helping strangers, that leaving the status quo in place is good for American workers and see how many spiritual leaders you can peel off.

The fact of the matter is, these restrictionist groups will do and say just about anything to stop progress towards immigration reform—but their latest attempts to divide people do not stop at the parish door. Attempting to turn the religious community against immigrants is ironic given that communities of faith have been at the forefront of fighting for immigrants rights for many years. At a time when xenophobia and angry rhetoric aimed at immigrants has become rampant, Catholics, Lutherans, Evangelicals, Jews, and Muslims have and continue to stand up for immigrants—even when many other groups do not.

Another shortcoming with restrictionist strategy is the claim that they are standing up for the American worker. Number one, they have no track record of ever doing so. Number two, the commitment by labor unions like SEIU and AFL-CIO to work towards immigration reform shows that the real defenders of the American worker are already on board for change.

Despite their claims, the difficult economic and employment issues we face are not helped by mass deportation. We know that immigrants stimulate our economy and studies have shown that immigrants don’t actually compete with U.S. workers in the workforce. Immigrants have different skill sets and are a highly mobile part of the workforce. Researchers have found that where there are high levels of native unemployment there are low levels of immigration and vice versa.

A recent IPC report Untying the Knot: The Disparity Between Immigrant Workers and Unemployed Natives finds:

Even during a time of economic recession and high unemployment, most native-born workers do not compete with most immigrants for the same jobs. This is apparent even when we compare unemployed natives with employed “recent” immigrants who came to the United States within the past decade. Unemployed natives and employed recent immigrants tend to have different levels of education, to live in different parts of the country, to have experience in different occupations, and to have different amounts of work experience. As a result, they could not simply be “swapped” for one another.

Additionally, these restrictionist groups have long claimed that U.S. is importing more than a million workers a year, yet another dubious scare tactic that has no basis in reality.

There is no limit to where anti-immigrant groups will go to stop progress on reforming our broken immigration system. Rather the responsibility lies with us, to stand up and preach the truth about how the status quo is no longer acceptable.