Dr. Martin Luther King, Jr., and the Intersection of Immigration and Civil Rights 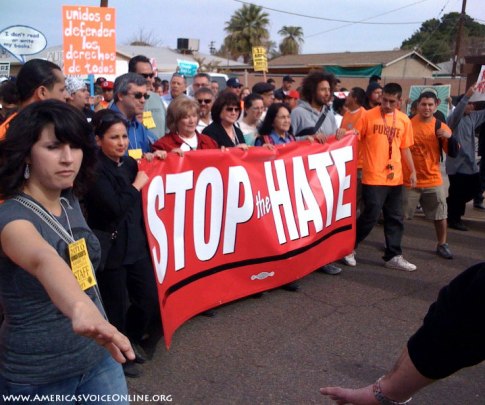 Today, we celebrate the life and legacy of Dr. Martin Luther King, Jr., a man whose dream of equality and human rights changed the course of history. His legacy will be remembered this week by people of all colors and creeds who still believe in the American dream and who continue to fight for equality, civil rights and the basic human dignity they deserve. Over the weekend, thousands of human rights activists took to the street in Phoenix, Arizona, to march for civil rights and for “long-overdue federal action on immigration.”

So what is the link between immigration and civil rights? In a recent editorial, Rev. Harvey Clemons Jr., the pastor of Pleasant Hill Baptist Church in Houston, connects Dr. King’s fight for equality with the struggle many immigrants face today.

Immigration is about human dignity and the nobility of parents of different tribes and nations facing the risk of coming to a foreign land, a land of opportunity, to work for a better tomorrow for their children…Dr. King invoked the truth, the truth being that all humans ought to be treated with a certain dignity. It would be natural for us to look to him as an example for fighting for a just cause.

Even some of the migration experiences of African-Americans, coming from the South, leaving conditions of economic injustice and terrorism from both legal authorities and groups like the Ku Klux Klan, we see that same kind of movement in people across borders.

Leaders within the civil rights movement have long been outspoken supporters of immigration reform—especially when it comes to speaking out against broken immigration enforcement policies and racial profiling. Last March, House Judiciary Chair John Conyers, Maricopa County Supervisor Mary Rose Wilcox as well as a bevy of civil rights leaders, presented a petition to the Department of Justice and Homeland Security signed by more than 38,000 Arizona residents calling for an investigation of Maricopa County Sheriff Joe Arpaio—a man whose abuse of power, racial profiling and egregious immigration enforcement tactics have earned him numerous law suits, an FBI investigation and a summons to appear before a Grand Jury. At a press conference introducing the petition, Congressman Conyers called for unity in the fight to end racial profiling.

We think, in a lot of ways, our Hispanics brothers and sisters are becoming the new targets of discrimination and profiling that used to occur to African Americans. We’re saying it together—African Americans, Hispanic Americans and everyone else—no more racial profiling.

Similarly, Rev. Al Sharpton, also an outspoken advocate in the fight to end racial profiling, noted that defending civil rights should be an “everybody issue”:

A recent poll conducted by the Pew Research Center reveals that one year after the election of President Barack Obama, “black optimism about America has surged, while Hispanics have become more skeptical about race relation.” According to the poll, Hispanics are now seen as the ethnic group facing the most discrimination—which is not surprising, as America’s Voice blogger Jackie Mahendra says, given the “racially-charged immigration rhetoric that flows from talk radio to nightly news to the halls of Congress.”

Now, more than ever, it’s important to remember Dr. King’s message that all men are created equal—not just for Hispanics and African Americans, but for all people who come to this country in search of the American Dream.