Thousands Gather Across the U.S. to Support Comprehensive Immigration Reform 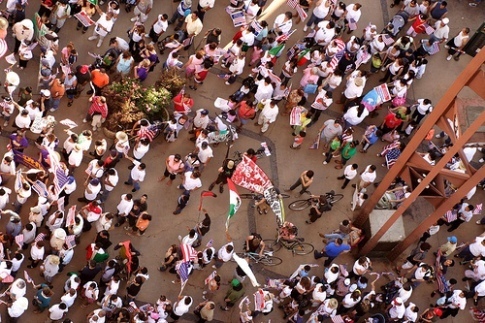 The Reform Immigration FOR America campaign launched its Massive 2010 Nationwide Kickoff last week, holding more than 100 events in 28 states. Events include town halls, marches, vigils, and other rallies. In Denver, Colorado, hundreds of faith leaders and immigrant advocates joined U.S. Sen. Michael Bennett (D-CO) to rally for comprehensive immigration reform (CIR). Sen. Bennett, packed in an auditorium with more than 500 supporters of immigration reformer, pledged his support for immigration reform and further commented that “the [immigration] system is unmanageable” and will “require a broad coalition of groups to bring about reform.”

In Little Rock, Arkansas, more than 850 community members gathered to ask their members of congress to support CIR, in an event called “The American Dream FOR Arkansas.” A meeting of African-American and immigrant community leaders in Charlotte, North Carolina drew more than 2,000 people, forcing the event to be moved to a larger venue. In Carson City, Nevada, local labor, faith, and business leaders gathered to call for CIR, with more than 350 people in attendance. In Virginia, immigration advocates expressed the urgency of passing comprehensive immigration reform in 2010:

“It’s not a question of whether Congress should pass comprehensive immigration reform, but when. We can’t afford more delay – it’s time to fix our broken immigration system.” remarked Teresa Stanley of the Virginia Organizing Project. “We want action from our elected leaders. Too many Virginian families are feeling the effects of a severe recession, and comprehensive immigration reform will put us on the road to economic recovery. We need reform now.”

The outpouring of support at these events is reiterated in a new poll by America’s Voice, which showed that 66% of voters still want Congress to pass CIR. Despite recent congressional focus being dominated by healthcare reform, job creation, and climate, CIR is still important to voters. In addition, immigration reform remains an issue that cuts across party lines, with CIR garnering support from 62% of Republicans, 67% of Independents, and 69% of Democrats. Even more encouraging is that when given further details on immigration reform, voters are more likely to support CIR. In the poll, if voters were told that undocumented immigrants would be required to register and meet certain conditions (working, paying taxes, learning English), their support climbed to 87%.

The need for comprehensive immigration reform cannot be ignored, and the Reform Immigration FOR America campaign is rallying thousands of people around the nation to make sure they are heard by their members of Congress. Hopefully this grassroots support and favorable polling numbers will convince Congress that CIR must be tackled in 2010.