Got Faith? A Closer Look at the Religious Movement for Immigration Reform 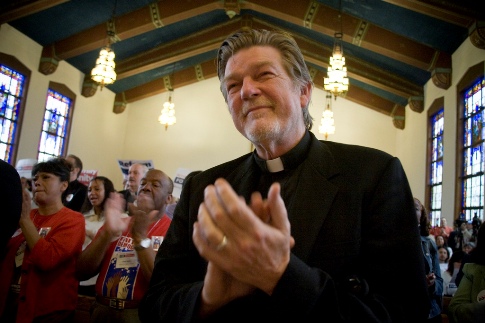 Today, hundreds of Evangelical leaders from around the country will join hands to raise awareness for comprehensive immigration reform during a National Day of Prayer. Like many faith groups, Evangelicals are the most recent to sign onto the national religious effort to “act on the Biblical mandate of compassion and justice toward immigrants” and call for reform of our broken immigration system. Some restrictionist groups, however, continue to criticize the role of religion and faith in the immigration reform movement—some even using the Bible as a weapon to condemn immigrants as law-breakers and sinners.

The Center for Immigration Studies, a restrictionist group that bills itself as “pro-immigrant with a low-immigration vision,” recently released a poll which “claims to have found broad opposition among people of faith for comprehensive immigration reform.” The group also published a report, A Biblical Perspective on Immigration Policy, which condemns immigrants and attempts to promote an anti-immigrant agenda by narrowly examining the biblical role of civil government through scripture. Predictably, the report falls short and as Dr. M. Daniel Carroll Rodas, a Professor of Old Testament at Denver Seminary, points out, reveals a substantial lack of fact, scope and at best a loose interpretation of historical context.

In response to CIS’s attacks against faith communities, immigration attorney Bruce Hake, and his wife, Judy Hake, a certified Roman Catholic catechist, unmask CIS’s intentions as “restrictionist propaganda, not a serious study of scripture.” The Hakes’ rebuttal, What the Bible Really Says about Immigration Policy (originally published in Bender’s Immigration Bulletin), deconstructs CIS’s misleading arguments—that religious leaders are in favor of “open borders;” the Bible dictates that “mercy toward foreigners” only applies to individuals, not government/civil authorities; and that foreigners have a duty to stay at home, even if starving—and defends what immigration faith advocates actually want:

Another, more preposterous, example of CIS failed reasoning includes a paragraph on immigrant’s envy for American material blessings and the cost of such sins:

Foreign lawbreakers’ envy toward Americans’ material and political blessings may bring upon themselves eternal consequences: “It is through this craving [love of money] that some have wandered away from the faith and pierced themselves with many pangs” (I Tim. 6:10b). Violating immigration laws, just as violating other civil laws, manifests one’s failure to trust God to meet His people’s needs. Illegal aliens and their activists must ask themselves what the cost of such sin is worth to their souls.

In other words, undocumented immigrants are all motivated by greed and envy, and if you support them, you’re going to Hell! That’s spectacularly mean and unhinged.

The Hakes’ rebuttal illustrates just how bizarre and misleading restrictionists’ reasoning can be when it comes to immigration and faith and goes one step further to demonstrate what it is that immigration faith advocates want—immigration policies that reflect mercy to the stranger, recognition of immigrants as a human being, the value of family unity, the importance of secure borders, and an earned path to citizenship for unauthorized immigrants.

Today’s Evangelical Day of Prayer is not just another exercise in hand-holding, kumbaya-ing or a call for disobedience of civil authority—it is the latest commitment in a larger interfaith community push for immigration reform. While restrictionist groups continue to condemn immigrants, co-opt scripture verses and write off religious leaders as “out of touch with their congregations,” faith groups will continue to stand together in faith and good works for more just and human immigration laws—laws that welcome the foreigner as human beings rather than objects in a rhetorical and political battle of partisanship.