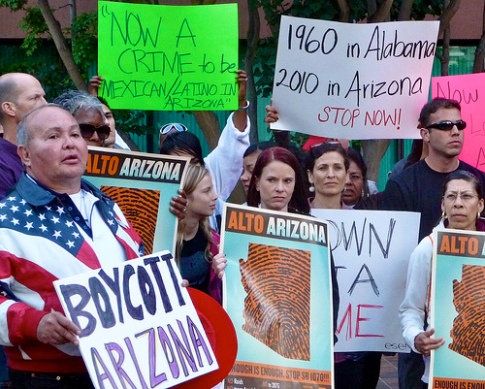 Arizona’s new controversial enforcement law, signed into law last week by Gov. Jan Brewer, has the potential to shake down more than just undocumented immigrants and suntanned citizens. Arizona’s businesses and tourism industry are also likely to take a hit as more and more people call for an economic boycott. The law, which requires state and local law enforcement to check the documents of people they “reasonable suspect” of being here illegally, is causing many potential investors, visitors and tourists to avoid Arizona altogether. With a state budget deficit of more than $4.5 billion and an economy heavily dependent on tourism, Gov. Jan Brewer (who’s up for reelection this November) and the Arizona legislature will need to consider not only how they plan on paying for implementation of this new law, but also how to pay the larger price of doing business in a restrictionist state.

“There has to be an economic sanction for this,” the congressman said. “Our economic sanction is: Do not do business with a state that is propagating the idea that separate but equal treatment under the law…can be codified.”

And the voices keep getting louder. Echoing Rep. Grijalva’s sentiments, La Opinión, the nation’s largest Spanish-language newspaper, called on all those who believe in the U.S. Constitution to boycott Arizona. The San Francisco Board of Supervisors is currently considering a resolution to “end any and all contracts with Arizona-based companies and to stop doing business with the state.” The American Immigration Lawyers Association (AILA) cancelled a fall conference in Arizona. AILA President Bernie Wolfsdorf explained that AILA “cannot in good conscience spend association dollars in a state that dehumanizes the people we represent and fight for” and that the Arizona bill “validates all of the irrational fears by people who are not willing to acknowledge the economic and cultural benefits of immigration to our country.”

Arizona leaders and businesses are pleading with people to consider what a boycott would mean for Arizona. Phoenix Mayor Phil Gordon, who spoke out against the law, asked people not to punish the entire state. Similarly, the Arizona Hotel and Lodging Association created a Facebook page, “Don’t Boycott Arizona Tourism” and Arizona Diamondbacks president and CEO, Derrick Hall, worries that the law will jeopardize the state’s MLB All-Star Game. Remember that the NFL took the Superbowl away from Arizona in 1993 when the state refused to recognize MLK Day.

With demands for a boycott on the rise and a budget deficit of more than $4.5 billion, the question remains: how exactly is Arizona going to pay for their new enforcement law? Gov. Brewer cites a $10 million investment in local law enforcement—federal stimulus money the state received from American Recovery and Reinvestment Act. There’s also controversial one-cent sales tax increase to be voted on in May. But considering the number of immigrants and Latinos who would potentially leave the state due to the new law—taking with them their tax dollars, businesses and purchasing power—as well as potential law suits, calls for a boycott and loss in tourism, Arizona is likely to fall even deeper into debt.

Today, a USA Today article reported that “the Arizona agency tasked with training 15,000 law officers to enforce the state’s controversial new illegal immigration law has asked federal authorities for assistance, but administration officials say it is unclear whether the government will help.” But how much free help can they expect to get from a federal government threatening to challenge the constitutionality of their new law?

The bottom line, however, is that no matter how much Arizona spends on law enforcement training, the people of Arizona (the undocumented, documented and slightly tanned) will ultimately lose if people are afraid to enter their state.