The Wrong Side of History: Why the Anti-Immigrant Movement Will Always Lose 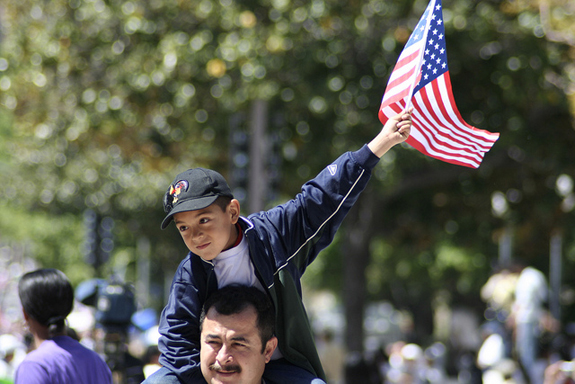 The anti-immigrant movement’s current motto could be “Desperate times call for desperate measures.” As evidence mounts that the demographic makeup of the country is changing, the current crop of immigration restrictionists know that they are gradually losing their committed base. Thus, they are pulling out every trick in the book to motivate that base to scream even louder. Most recently, House leaders of the movement tried to pit minorities, including Latinos, against immigrants by claiming that they are stealing all the low wage jobs. They are also trying to sell the point that America’s health care, public education and even environmental problems would all go away if we just deported 12 million people—desperate arguments, from a desperate group.

What are they so afraid of? The same thing that prior anti-immigrant movements fear—the loss of power for one group as its share of the population declines. Case in point: Texas.

Texas will gain four new congressional seats based on the 2010 Census, and much of that growth was fueled by the increase in the Hispanic population, up 41.8 percent since 2000. The number of illegal immigrants in Texas is estimated at 1.6 million out of the total state population of 25.1 million.

Texas is hardly alone in this epochal demographic shift. In the first four states for which the Census Bureau released detailed information – New Jersey, Louisiana, Mississippi and Virginia – the number of whites under age 18 actually declined in the past decade. The numbers of Latinos and Asians among the young, by contrast, are soaring, and they are highest among the youngest. … Nationally, whites are now a minority – 49.9 percent – of Americans age 3 and under.

In response to these changes, pitting different ethnic groups against each other becomes an easy out, making it possible to oppose immigration while seemingly protecting minority populations. No wonder the anti-immigrant movement is resorting to selling the myth that immigrants are costing Americans money and threatening our safety. Perpetuating these paranoid hypotheses may win elections in the short run, but they won’t secure the political future. That future is more and more up for grabs, as both parties recognize that addressing immigration in a sane way is important to many of those who will come of age as voters in the next decades. Republican or Democrat, the changing face of America requires rethinking whether an anti-immigrant frame will play with people whose immigrant roots are still relatively new.

So while the anti-immigrant movement clearly has the will and the ability to keep dusting things up for the foreseeable future, their influence will fade as more and more people come to realize that you can’t stop change, you can’t win elections without being inclusive and you can’t deport your way out of our immigration problems.