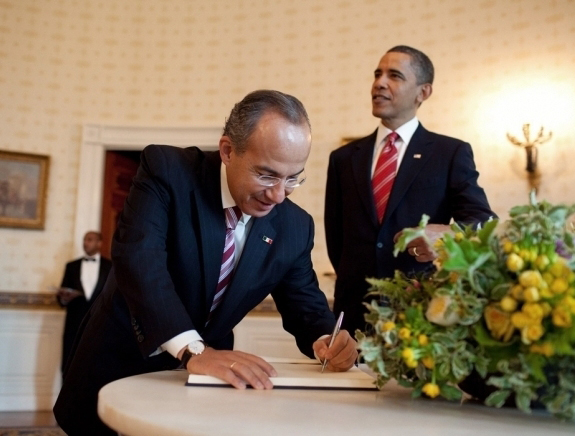 Earlier today, President Obama and Mexican President Felipe Calderon met at the White House to discuss, among other things, shared concerns over tensions along the Southwest Border. This meeting follows a tumultuous year of events, including the passage of S.B. 1070 (vehemently opposed by the Mexican government), the tragic death of an ICE agent in Mexico a few weeks ago, and the ongoing violent drug war on the Mexican side of the border. These tensions notwithstanding, it is hard not to liken the meeting to the one that took place between Vicente Fox and President Bush 10 years ago. As in 2001, drugs, border violence, trade, and immigration were all on the agenda. However, the economic meltdown of the last few years likely made the conversations on immigration very different.

Back then, Bush was focused on creating a new temporary worker program to feed the demand for new workers. Today, President Obama faces a different problem—convincing people that immigration helps, rather than hinders the economy. During a press conference between meetings, President Obama reaffirmed his commitment to comprehensive immigration reform, stating that:

I remain deeply committed to fixing our broken immigration system with comprehensive reform that continues to secure our borders, enforces our laws, including against businesses that break the law, and requiring accountability from undocumented workers. We have to conduct this debate in a way that upholds our values as a nation of both laws and immigrants.

President Obama also noted that Mexico is the 2nd largest importer of U.S. goods, supporting one million American jobs in this manner. Calderon echoed this sentiment, noting that the border must be turned into “the land of opportunities, not of conflict.” It is encouraging that the two Presidents are of the same mind on immigration reform and the border, and provides the basis for reform that this country sorely needs. President Obama also stated, “I’m eager to work with Republicans and Democrats to get this reform done, which is vital to the U.S. economy.”

While immigration reform is vital to the U.S. economy, Rep. Lamar Smith (R-TX) faced recent critics of his immigration subcommittee’s attempt to pit native born workers against immigrants in an editorial in the Washington Times which is strewn with errors and misconceptions. He cited a report that states unauthorized immigration costs California $22 billion each year, noting that merely eliminating all unauthorized immigrants would pretty much close California’s budget gap. This conveniently ignores the fact that these immigrants are net contributors to the California economy, despite other costs. Unauthorized workers are consumers who spend their wages in U.S. businesses, contributions which sustain U.S. jobs.

According to a report by the Perryman Group, if all unauthorized immigrants were removed from California, the state would lose $164.2 billion in economic activity, $72.9 billion in gross state product, and approximately 717,352 jobs, even accounting for adequate market adjustment time. Furthermore, a study from the University of Southern California estimates that because unauthorized immigrants earn less than they would if they had legal status, the California state government lost out on $310 million in income taxes in 2009, while the federal government missed out on $1.4 billion.

Failing to go after that lost revenue makes little sense. But sense hasn’t been much of a player on the immigration issue in the ten years since President Bush and President Fox met.