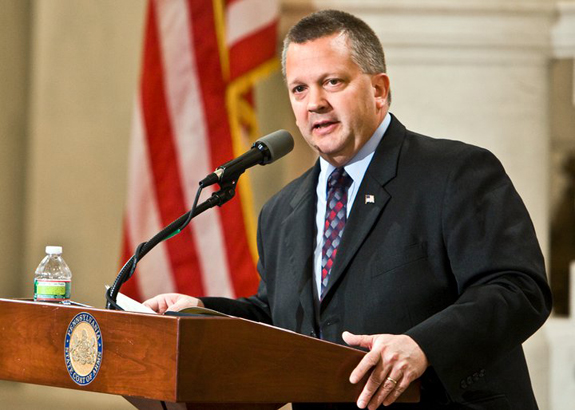 Last week, the Southern Poverty Law Center (SPLC) released a new report, “Attacking the Constitution: State Legislators for Legal Immigration (SLLI) and the Anti-Immigrant Movement,” which examines a dozen leading members of SLLI. The report also links SLLI (and state legislators from across the U.S. who comprise its membership) with the notoriously anti-immigrant John Tanton Network—including his front group FAIR (designated as a “hate” group by SPLC). While the report focuses mainly on SLLI members and their quest to rewrite the U.S. Constitution to deny citizenship to the children of the undocumented, their anti-immigrant efforts extend to a wide range of destructive state legislation.

One featured member, Randy Terrill of Oklahoma, is making headlines pitting state Republicans against the business community in an attempt to push an Arizona SB 1070 copycat (HB 1446) through the Oklahoma legislature. Another SLLI member, SB 1070 author and Arizona State Sen. Russell Pearce, could teach a class on how to exploit immigration for notoriety. This month, Sen. Pearce continues his quest to make the state of Arizona the most unwelcome place in America by pursing legislation that would eliminate access to hospitals and schools to undocumented children and adults, as well as an “English-only” policy for state agencies.

Another SLLI member who deserves mention is Stephen Sandstrom, the Utah state legislator who is working tooth and nail to bring Arizona-style anti-immigrant legislation to his home state. Sandstrom’s punitive immigration bill recently passed with other measures brought forth by other legislators designed to counter-balance Sandstrom’s punitive measures.

The member most deserving of a watchful eye, however, is SLLI ringleader Daryl Metcalfe of Pennsylvania. According to SPLC he is the “founder and driving force behind SLLI” and has close ties to FAIR and the John Tanton Network. He stands out not for his legislative successes, but rather as someone desperately seeking attention and using a serious issue like immigration to get it. Metcalfe regularly makes rounds in the media and keeps company with Russell Pearce, Kris Kobach (working on his own SB-1070 copycat in Kansas) and many of the other anti-immigrant faithful. He also frequently cites questionable data created by FAIR to prop up his state-based anti-immigrant agenda.

By tracking SLLI and its members’ anti-immigrant efforts, the SPLC continues its impeccable documentation of the Tanton network, including their most recent effort to move their work to the state level in order to rid America of what SLLI ringleader Daryl Metcalfe calls the “illegal alien invasion.” Researchers at the SPLC continue to demonstrate the close-knit and organized nature of the anti-immigrant movement in America.

The SPLC’s exposure of SLLI’s members also makes clear that these are not the kind of people you want writing your immigration legislation. The members views are far outside of the mainstream and the measures they are pursuing are not in best interests of states. SLLI and its Tanton network sponsors seem perfectly happy to exploit the void caused by federal inaction on immigration for their own ends. The best and most effective way to undermine these efforts is for Congress to get its act together and pass reforms that will take the pressure off states and put our immigration system back on track.