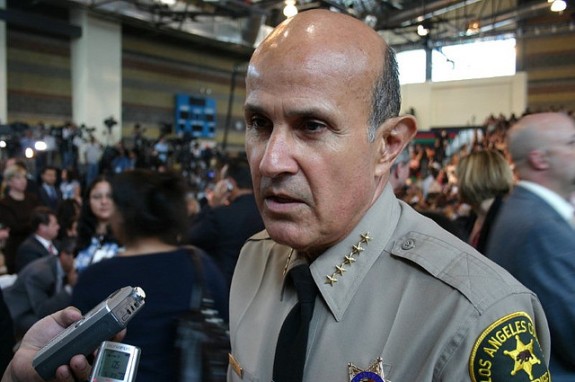 Los Angeles County Sheriff Lee Baca’s recent statements concerning the Secure Communities program is yet another development in what appears to be a saga surrounding ICE’s controversial enforcement program. Earlier this month, Illinois Governor Pat Quinn requested his state’s MOA with ICE be terminated. Advocates in New York have asked that their governor do the same.  A lawmaker in San Francisco has even floated legislation that would allow counties to opt out of the program. Meanwhile, Congresswoman Zoe Lofgren, ranking member on the Immigration Subcommittee, prompted a DHS Office of Inspector General (OIG) investigation to “determine the extent to which ICE uses the program to identify and remove dangerous criminal aliens from the United States.”

Earlier this month, Sheriff Baca of Los Angeles and Sheriff Hennessey of San Francisco appeared on a local radio show to discuss the role of local police in the enforcement of federal immigration laws.  Like many outspoken opponents of Secure Communities, Hennessey pointed out that the program casts too wide a net and hinders the police’s ability to get the cooperation of the local immigrant community.  Although Hennessey attempted but was not able to opt out of the program, he said that San Francisco will not honor detainers for immigrants charged with minor crimes.  In other words, if ICE requests that the sheriff’s office detain someone who has been booked into jail until ICE can take custody, San Francisco will use its discretion in cases where immigrants have been charged with minor crimes.

Sheriff Baca, on the other hand, praised the Secure Communities program while also acknowledging that many of the immigrants identified and deported through the program are minor offenders or noncriminals.  Baca said that ICE has the ability to deport an immigrant, regardless of a criminal conviction, and he has no problem with people being deported after being charged with traffic violations.  Baca also claimed that he has not gotten any complaints about police mistrust in the immigrant community.

The show’s host, Warren Olney, pressed Baca on the issue of noncriminals being identified and deported through Secure Communities.  He referenced the case of a woman who had called 911 and had been arrested along with her husband in a domestic violence case.  The woman was never convicted of a crime, but was discovered to be undocumented and was taken into ICE custody for deportation proceedings.  Baca inaccurately insisted that she had committed a crime.  Olney pointed out that she was accused of committing a crime, but was never convicted.  When the host mentioned that everyone is presumed innocent until convicted, Baca said “that’s true if you’re an American citizen.”  Olney then asked “So you’re saying that if people are here illegally, they simply are not subject to the kinds of civil rights protections that American citizens are?” To which Baca responded, “That’s basically correct.”

Legal experts have pointed out that the U.S. Constitution makes no distinction between legal and unauthorized immigrants, and that the protections of the Constitution apply to all persons, regardless of race, religion, sex, national origin, or immigration status.  Seeing that Sheriff Baca’s job is to uphold the U.S. Constitution, his comments are deeply disturbing.

Baca’s statement highlight a serious problem with Secure Communities—unauthorized immigrants are being arrested, identified, and deported even if they are never convicted, which is in contradiction to ICE’s stated enforcement priorities.  If the charges are dropped, ICE still takes them away.  Or, the fact they are put into ICE custody makes it difficult for them to pursue due process and fight the criminal charges.  In some cases, they’re deported before they even have a chance to defend themselves against the criminal conviction.  OIG’s investigation of the program is a welcome development, but much more action is needed immediately.