Controversy Over Deportation of Haitians Continues 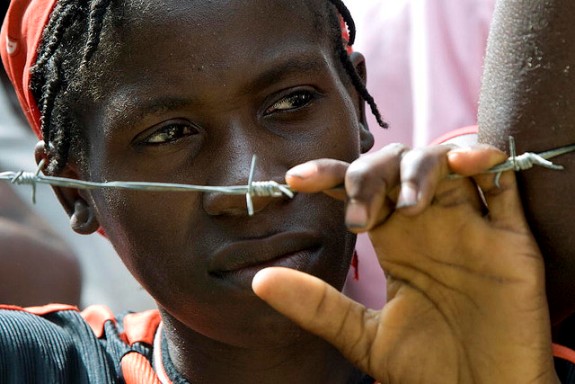 Last week, CBS refused to display an advertisement on its Jumbotron in Times Square denouncing the deportation of Haitians because it was too controversial. Deportations to a cholera-plagued and earthquake-devastated country should be controversial, especially in light of DHS’s recent announcement that it would extend Temporary Protected Status (TPS) for another 18 months and would expand the group of Haitians eligible for TPS.  Going forward, Haitians who came to the U.S. after the earthquake no later than January 12, 2011 will be eligible to register for TPS. However, while the extension is a terrific humanitarian victory, DHS still intends to deport certain Haitians convicted of crimes, demonstrating some of the inconsistent policies that have plagued DHS’s handling of Haiti almost from the beginning.

Days after the tragedy of the January 12, 2010 earthquake, Secretary of Homeland Security Janet Napolitano swiftly exercised her discretion to designate Haiti for Temporary Protected Status (TPS), enabling tens of thousands of Haitians already in the U.S. to apply for a work permit and remain in the country without fear of deportation. Immigration and Customs Enforcement (ICE) suspended removals to Haiti—including more than 1,000 Haitian orphans who were paroled into the U.S. for adoption by American parents. U.S. Citizenship and Immigration Services (USCIS) went even further and offered a number of other temporary relief measures to Haitians, including favorably adjudicating requests to change or extend nonimmigrant status and expediting the processing of certain immigrant petitions, parole and advance parole requests.  USCIS went out of its way to spread the word about these generous programs to the Haitian diaspora in English, French, and Creole.

But at the end of 2010, DHS hit a fork in the road.  While USCIS was gearing up for the final push before the mid-January 2011 TPS registration deadline – historically the time when the largest number of individuals register – ICE informally announced that it was resuming deportations to Haiti in December and anticipated deporting approximately 700 Haitian criminals by year’s end.  Over 300 Haitians were quickly rounded up, transported to remote detention centers in Louisiana far from their attorneys and family members, and prepared for their removal.  Despite a raging cholera epidemic (especially in the detention centers where Haitian deportees are routinely held), over half a million Haitians living in displaced persons camps, and near total lack of jobs, the first planeload of 27 Haitians was sent on January 15, 2011.  Ten days later, Wildrick Guerrier—a lawful permanent resident who had lived in the U.S. for 17 years—died of cholera-like symptoms in a Haitian jail cell.

Following public outcry, ICE issued  a “draft” policy memorandum on Haitian removals on March 7 – six weeks after that first group was deported.  Its final policy, published on April 1 after a limited public comment period, made clear that removals to Haiti would proceed full steam ahead.  Indeed, ICE deported a second group of 19 Haitians on April 15.

But questions remain regarding ICE’s final policy. Even with the recent TPS extension,  how many more Haitians will be returned to Haiti?  Will ICE only deport those with serious criminal convictions, or will they include many with multiple misdemeanors (all of whom fall within the parameters of ICE’s final Haiti policy)?  Will ICE give appropriate weight to an individual’s equities in the U.S. and compelling humanitarian circumstances, as the policy indicates it will?  Will ICE’s actions create a chilling effect on the ways in which Haitians interact with USCIS and local law enforcement?

DHS should continue the positive steps it has taken to expand the scope of TPS by exercising its discretion to deport Haitians at this time.  The Department should cease deportations to Haiti until post-quake conditions on the ground are more stable and less life-threatening. ICE should use the tools at its disposal to consider alternatives to detention and supervised release to manage those Haitian criminals who have served their sentence but can no longer be legally detained.  Additionally, DHS should use its discretion to create a Haitian Family Reunification Parole Program, as is currently in operation for Cubans, to allow Haitians with approved family-based immigration petitions to wait and work in the U.S. for a visa.