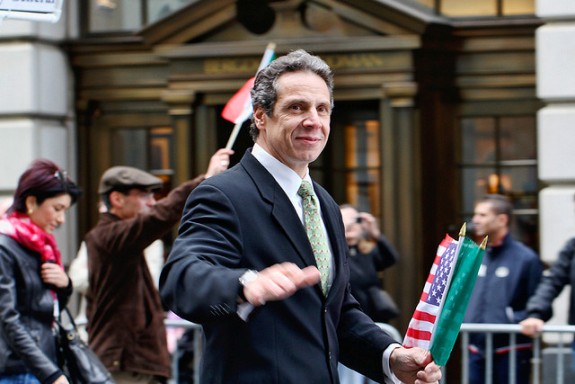 Yesterday, New York Governor Andrew Cuomo suspended his state’s participation in the Secure Communities program. In a letter to DHS, Gov. Cuomo wrote that the Secure Communities program is “having the opposite effect” of its intended purpose to target those who pose the “greatest threat” to the community and furthermore, compromises public safety “by deterring witnesses to crime and others from working with law enforcement.” Cuomo’s statement came after receiving pressure from state legislators, advocacy organizations, and other residents including a petition to the Governor opposing Secure Communities which had over 6,300 signatures.

The Secure Communities program has come under a great degree of fire since its inception in 2008. While DHS sold it as a program to target serious criminals, DHS’s own data has shown that large numbers of immigrants identified and deported through the program have minor criminal infractions or no criminal histories at all. Local police have also complained that the program destroys the trust between themselves and the communities they are supposed to serve and protect. And recently uncovered emails from DHS point to deceptive practices in the marketing of the program, which is set to be investigated by the DHS Inspector General.

Gov. Cuomo is not the first state official to opt-out of Secure Communities, a program already active in over 1,000 jurisdictions across the country and which DHS plans to expand nationwide by 2013. Several weeks ago, Illinois Gov. Pat Quinn sent a similar letter to DHS suspending his state’s memorandum of agreement (MOA). Other states, like California, are also moving legislation which they say will allow individual jurisdictions to opt out of the program.

However, it remains unclear whether New York and Illinois will actually be able to opt out of the program. While DHS initially described Secure Communities as voluntary, the agency has since said it is mandatory for all jurisdictions. In response to Gov. Quinn’s letter, DHS announced it would continue to share fingerprints submitted by the state with immigration databases. There is a data sharing agreement between the Department of Justice (DOJ) and DHS that allows for the two agencies to share fingerprints submitted by states.

Hopefully, this additional pressure from New York officials will encourage DHS to have a serious and constructive conversation with all state officials about the program. Moving forward, DHS must realize it cannot ask jurisdictions to sign contracts for a program they marketed as voluntary, then say it’s mandatory and not honor those who wish to opt-out.