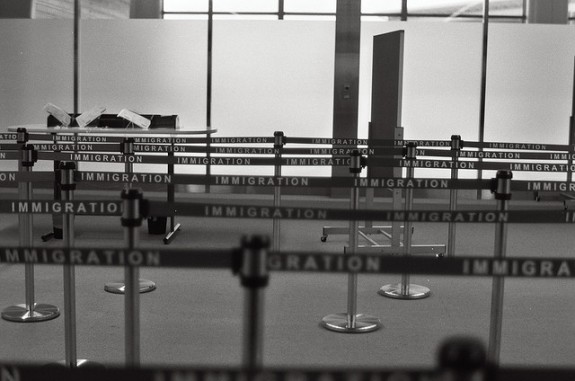 As readers of this blog know, the Center for Immigration Studies (CIS) often issues studies that make us cringe. Earlier this week, however, the DC-based restrictionist organization issued a report that made us laugh. Pseudonymously written by a retired government employee, the report purports to explain the “basics” of the deportation process. At more than 10,000 words, the report contains too many false analogies, misleading statistics, and non sequiturs to individually refute. But a few of the more outlandish arguments are too good not to pass up.

Amusing as some of the report’s assertions may be, its true intent is no laughing matter. The expansion of Secure Communities and other programs that rely on local police to identify undocumented residents has created crushing backlogs in our nation’s immigration courts. Rather than seek the hiring of more immigration judges, or giving them the tools necessary to manage their docket, restrictionsists are pushing for immigrants to be deprived of hearings in the first place.

While the problems plaguing our immigration courts are a prominent symptom of our broken immigration system, the solution is not to mean-spiritedly detain more people or deport them outside the existing process. Instead, it is to provide immigrants more of the rights available to criminal defendants, and to use enforcement resources wisely. This means setting priorities and exercising prosecutorial discretion in appropriate cases, something the Obama Administration has expressed its commitment to do. Just as criminal prosecutors routinely dismiss charges against minor criminal suspects, the federal government need not deport every undocumented immigrant they happen to encounter. In that respect, the truth could hardly be more basic.