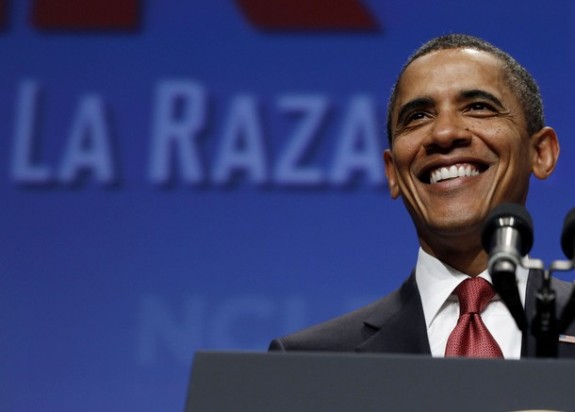 Amid frustrated shouts of “Yes, You Can!” from advocates in the audience, President Obama again deferred the power to fix our broken immigration system to Congress today during a speech at the National Council of La Raza’s (NCLR) annual conference. After highlighting his administration’s bona fides on issues important to the Latino community—appointing Justice Sonia Sotomayor on the Supreme Court, naming Labor Secretary Hilda Solis to his cabinet and delivering health care to millions of Latino families—the President turned to the thorny issue of our broken immigration system—a system many advocates believe the President should fix using the power of executive authority.

In his address to NCLR, the President began by highlighting the many promises his administration has made and kept to the nation, particularly the Latino community, as well as the economic and moral imperative of a functioning immigration system. But when it came to actually fixing our broken immigration system, the President could only promise to enforce the laws on the books “in the most humane and best way possible,” then shifted responsibility for an immigration overhaul back to Congress:

Now, I know some people want me to bypass Congress and change the laws on my own.  And believe me, right now dealing with Congress… Believe me, the idea of doing things on my own is very tempting.  I promise you. Not just on immigration reform.  But that’s not how our system works. That’s not how our democracy functions.  That’s not how our Constitution is written. So let’s be honest.  I need a dance partner here — and the floor is empty.

The President also reminded the audience that Republicans have repeatedly walked away from immigration reform efforts, mostly recently the DREAM Act, and urged them to build a movement that bridges party lines.

So, yes, feel free to keep the heat on me and keep the heat on Democrats.  But here’s the only thing you should know.  The Democrats and your President are with you.  Don’t get confused about that.  Remember who it is that we need to move in order to actually change the laws. So I need you to keep building a movement for change outside of Washington, one that they can’t stop.  One that’s greater than this community.

But to many advocates, the President’s continued promises were simply not enough. Felipe Matos of Presente.org, who called the President’s speech “predictable,” said that it was “inconceivable that [President Obama] keeps giving political speeches to win the Latino vote for 2012 while dividing the Latino community with his inhumane immigration policies.” According to Matos, the President has deported more than one million immigrants, including DREAM Act eligible students, since he took office. Another group referred to the President as “Deporter-in-Chief.”

And tomorrow, congressional leaders—including Reps. Raul Grijalva (AZ), Luis Gutierrez (IL), Mike Honda (CA) and John Lewis (GA)—as well as faith, union, civil rights and community leaders, will rally outside the White House to protest the record number of deportations and demand that the President use executive authority to “alleviate the suffering experienced in the Latino and immigrant communities.”

While it’s true that the whole of our complex immigration system cannot be fixed by a stroke of the President’s pen, there are some things the President can do now using executive authority to alleviate some of the pressure points. At some point, simply acknowledging that our immigration system is flawed and pointing to Congress to fix it will not be enough for the President, who some critics say is dangerously close to falling into the Latino/immigration credibility gap.