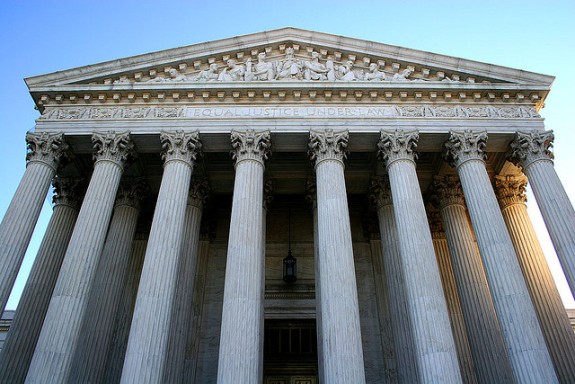 More than a year after SB 1070 was initially enjoined in federal court, the immigration restrictionists behind Arizona’s misguided immigration law have brought their case to the Supreme Court. Proponents of SB 1070 are likely to hail the state’s petition, filed yesterday, as not only the first step toward reversing the injunction against the law’s most punitive provisions, but toward cementing states’ role as the primary enforcers of federal immigration law. While we won’t know whether the Justices will even hear the case until at least October, the petition already foretells an uphill climb for Paul Clement, the attorney representing Arizona and former Solicitor General under President Bush, to persuade the Court to overturn long established principles.

Even at the Supreme Court, supporters of SB 1070 continue to use fear-mongering and misleading policy assertions to justify passage of the law. For example, Arizona’s petition makes numerous and irrelevant references to “Mexican drug cartels” as well as news stories about National Park rangers carrying machine guns along the border. It also misleadingly states that “federal immigration laws are not adequately enforced,” seemingly oblivious to the fact that more than one million deportations have already occurred since President Obama took office—or six times more than were carried out during the entire Reagan Administration.

The petition is also riddled with weak and contradictory assertions. For example, Arizona defends the legality of SB 1070 by saying its provisions “consciously parallel” those in federal immigration law. Yet other sections maintain that local police have “inherent authority” to arrest individuals for lacking valid immigration status, notwithstanding federal laws establishing very few circumstances in which they may do so.

In addition to being contradictory, these arguments are wrong. Far from mirroring federal law, SB 1070 makes it a misdemeanor for undocumented immigrants to seek or perform work in the state, even though Congress has never imposed criminal sanctions on foreign nationals for working without authorization. Moreover, if state officers truly possessed inherent authority to investigate people on suspicion of unlawful presence, Congress would not have needed to create the 287(g) program, which, as the petition itself acknowledges, permits “state officials to perform the functions of federal immigration officers.”

Finally, the petition should put to rest claims that the Court’s recent decision in Chamber of Commerce v. Whiting—which upheld a separate law targeting employers of undocumented workers—makes the legality of SB 1070 a fait accompli. Tellingly, Arizona’s attorneys don’t discuss the case until the end of the petition, overlook significant distinctions between SB 1070 and the Legal Arizona Workers Act, and don’t even raise the possibility that the Ninth Circuit should hold a new round of arguments to consider its impact—as the Justices recently ordered in a challenge to a law from Hazleton, Pennsylvania, that the Third Circuit had previously found to be unconstitutional.

As we noted last month, SB 1070 and its various copycat laws have thus far been blocked by every federal court to consider their legality. Of course, the national anti-immigration groups that drafted the laws hoped all along that the issue would one day reach the Supreme Court. But if Arizona’s plea to the Supreme Court is any indication, the state may stand on shakier legal ground than the creators of SB 1070 initially believed.