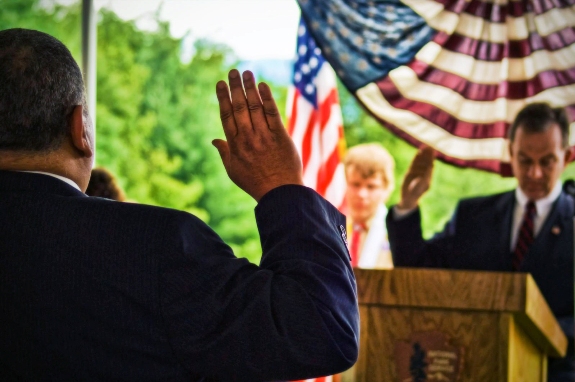 Over the weekend, more than 27,000 people became American citizens during 285 naturalization ceremonies held across the country in honor of Citizenship Day (September 17). Becoming a citizen, however, is hard work. A new country, new rules, high costs, and little targeted support for new immigrants make what should be a journey of exploration and opportunity one that may be frustrating and lonely. Not surprisingly, problems such as these are a major obstacle to naturalization. Scholars note that despite the steady rise in naturalization rates over the decades, a shocking number of people do not naturalize are actually eligible to do so. In 2008, for example, while more than one million LPRs naturalized, more than eight million were eligible to do so. Developing better integration programs, however, may improve naturalization efforts and lead to economic growth.

What keeps people from naturalizing? According to the Migrant Integration Policy Index III (MIPEX) survey of 31 European and North American counties, U.S. naturalization fees “are now higher than in 25 of the 30 other MIPEX countries. Half ask for just normal administrative fees similar to obtaining passports.” Furthermore, the process of acquiring citizenship in the United States can be uncertain, lacking “legal time limits (unlike in 13 MIPEX countries). Basic English and civics classes, are also grossly underfunded and the moneys that have been allocated are frequently in danger of being cut. In fact, Congress may not approve funding for these and other integration programs in the DHS Appropriations Bill for FY2012.

Integration is often an overlooked but key component of U.S. immigration policy. Successful integration of immigrants fuels their success, strengthens communities, and builds bridges between newcomers and other community members. Time and again, an influx of immigrants has been shown to reverse economic decline and breathe new life into urban areas, small towns, and rural communities. Moreover, integration can be a key to entrepreneurship and future economic growth.

Urban theorists Richard Florida and Charlotta Mellander found that nations which focus more on immigrant integration have higher levels of economic competitiveness, are more innovative, and have higher rates of entrepreneurship. Solid integration policies offer benefits to both the immigrant and the receiving community. The investment in immigrants, therefore, is an investment in the country’s own well-being.

The good news is that, unlike many aspects of immigration reform, the challenge for improving integration and naturalization efforts is less about reforming existing law and more about generating support for sufficient planning and resources to create a more robust integration program.

Developing a national integration policy—coordinating efforts across various federal, state and local entities—would allow us to leverage existing programs and efforts with an eye towards thinking about the big picture of immigration.  New immigrants and descendants of the Mayflower alike would benefit from such coordination, which could offer better, smarter ways to link communities together.

In many communities, these efforts are already underway. Groups like Welcoming America work with individual communities to find links between newcomers and other residents. Gatherings like the National Immigrant Integration Conference, now in its fourth year, bring together people who focus on any number of issues—economic development, education, literacy, civic engagement—that are not exclusively focused on immigration, but who recognize the value of integration of new immigrants to their work. Harnessing that interest offers a new way to talk about immigrants and integration that might lead us to one day think of citizenship as a process rather than a certificate.