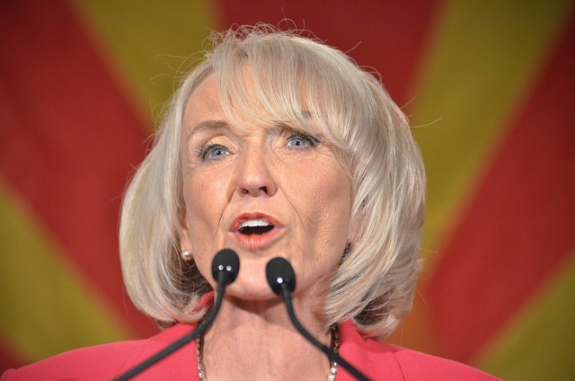 Arizona Governor Jan Brewer has built a political career out of playing fast and loose with the facts about immigrants—from stories of “headless bodies” in the desert to mischaracterizing all unauthorized immigrants as “drug mules.” And she’s not finished yet. Following a recent GOP Presidential debate, Gov. Brewer overplayed her hand by assuring the Huffington Post that unauthorized immigrants fleeing Alabama are “probably going back to Mexico” and that Alabama farmers will “probably find the U.S. workers” they need to replace them. If you think Governor Brewer is “probably” bluffing, you’re “probably” right.

It may be comforting for supporters of harsh state immigration laws to think Brewer’s claims are right. Immigrants, Latinos and their families, however, are “probably” not leaving the U.S. and, as Brewer said, “going back to Mexico.” First of all, not all unauthorized immigrants are Mexican. Secondly, not even during the recent economic recession was there any evidence that Mexican immigrants were returning to Mexico. A recent study from the RAND Corporation found that, despite improved economic conditions in Mexico and worsened conditions in the United States, fewer Mexican immigrants returned to Mexico in 2008 and 2009 than in the two years before the recession.

The truth about the impact of state immigration laws is far more complicated. While it’s possible that some unauthorized immigrants might be returning home, it’s more likely they are fleeing to either neighboring states or states where family members live.

Why? Evidence suggests that many unauthorized immigrants are firmly integrated into U.S. society. According to a Department of Homeland Security report, three-fifths of unauthorized immigrants who were in the country as of 2010 (11.1 million) were here for more than a decade. These immigrants live here; they work here; they send their U.S. citizen children to school here. In fact, the Pew Hispanic Center estimates that roughly 8.8 million people in the U.S. live in a mixed-status home—meaning that one or more direct family member is unauthorized.

And just because an unauthorized immigrant leaves a job doesn’t mean there’s an unemployed U.S. citizen standing in line to fill it. Governor Brewer is attempting to sell the same false “jobs creation story” that many supporters have used to justify passing strict immigration laws.

Thus far, Alabama farmers have been unsuccessful in attempts to recruit American workers. And it’s not just because Americans are unwilling to do the work. It’s because unauthorized immigration is not the cause of unemployment. Experts, like Daniel Griswold from the libertarian CATO Institute, have pointed out that immigrants and unemployed U.S. workers have different education and experience levels and work in different occupations. We cannot simply swap one for the other or deport our way out of unemployment.

The role unauthorized immigrants play in our workforce and economy is far more complicated than Brewer’s misguided assumptions. While it may be easy to scapegoat unauthorized immigrants for high unemployment rates, driving them from state to state is not going to solve our employment or immigration problems. It will, however, create new economic problems for states and small businesses…“probably.”