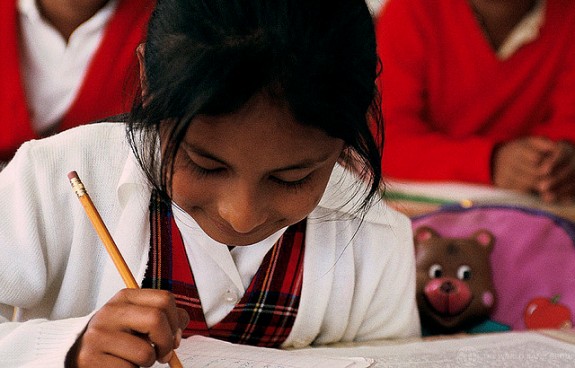 Today, the head of the legal arm of one of the most notorious restrictionist groups in the nation boldly admitted his work on Alabama’s new anti-immigrant law aims to end public education for the children of immigrants. Michael Hethmon of the Immigration Reform Law Institute (IRLI), an offshoot of the Federation for American Immigration Reform (FAIR), made no bones about being the author of the education provision in HB 56—which on its face requires public schools to determine the immigration status of enrolling students and their parents, but in reality chips away at children’s ability to get an education.

In fact, FAIR’s long-term vision to erode any and all rights afforded to the children of immigrants becomes increasingly clear with each new FAIR initiative—from attempts to repeal access to birth certificates at the state level through their state legislative arm (State Legislators for Legal Immigration) to IRLI’s litigation strategies in the courts that attempt to turn U.S. policy against immigrant children.

In defense of the education provision, Alabama Attorney General Luther Strange assured a judge that the provision would require nothing more than data collection and that “no child will be denied an education based on unlawful status.” However in the same New York Times article, Hethmon of IRLI admitted that HB 56’s education provision is just a first step:

The man who wrote the schools provision … that it is not meant as a deterrent — at least not yet. It is, however, a first step in a larger and long-considered strategy to topple a 29-year-old Supreme Court ruling that all children in the United States, regardless of their immigration status, are guaranteed a public education.

Hethmon then goes on to explain why this data collection provision is an important part of bigger plans and why they were careful no to go too far in HB 56:

Mr. Hethmon said the problem with these challenges is that they have not taken the trouble to gather the evidence the court found missing in Plyler.

“The toughest question has been obtaining reliable — and I mean reliable for peer-reviewed research purposes — censuses of the number of illegal alien students enrolled in school districts,” he said. “That information could be compared with other sorts of performance or resource allocation issues.

That information is then passed on to the State Board of Education not only to prepare an annual report with the data but also to “contract with reputable scholars and research institutions” to determine the costs, fiscal and otherwise, of educating illegal immigrants.

Because no one is actually barred from attending school and the data is not passed on to law enforcement, the provision passes constitutional muster, Mr. Hethmon said.

But it also potentially enables a fresh challenge to Plyler v. Doe, and the idea that schools are obligated to provide a free education to illegal immigrants.”

There is no doubt the “reputable scholars and research institutions” Hethmon refers to include FAIR’s research arm and sister group, the Center for Immigration Studies. If the Alabama Department of Education continues to collect data on the immigration status of immigrant children and makes it public, it won’t be long before FAIR and CIS produce data on the “fiscal costs of educating the children of immigrants in Alabama.”

While the New York Times article also quotes well-respected legal scholars who feel the chances of a repeal of Plyer V. Doe are highly unlikely, the damage that would be done by allowing these anti-immigrant groups access to private student data is undoubted. FAIR will exploit this information in order to wage a public relations campaign against the children of immigrants.

FAIR and company, also known as the Tanton Network, are continuing to build an elaborate infrastructure and execute a long term plan that systematically chips away at the rights of immigrant children.  It’s time Americans, beginning with Alabamians, put their collective foot down against this.