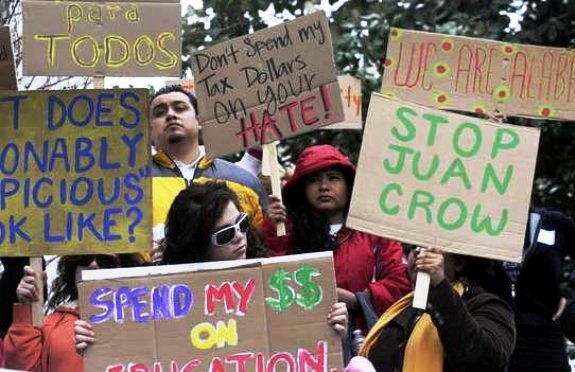 In the days following passage of Alabama’s extreme immigration law (HB 56), many business, religious and civil rights leaders spoke out about the law’s damaging impact on immigrant communities, farms, businesses, and schools. Since then, many notable community and civil rights leaders have stepped forward to add their voice to those demanding a repeal of the law. The Alabama NAACP, for example, recently joined immigrant rights groups to call for an end to what one African American minister described as “Alabama’s worst times since the days of segregation and Jim Crow.” This week, Illinois Congressman Luis Gutierrez met with members of several congressional caucuses—Hispanic, Black, Asian Pacific American and Progressive—to address what he calls Alabama’s “civil rights emergency.”

Last month, the Alabama NAACP joined the Alabama Coalition for Immigrant Justice (ACIJ) to oppose HB 56. At the rally, Alabama United: One Family, One Alabama, Alabama NAACP president Bernard Simelton called the law “mean-spirited” and said that “we have to join forces and defeat it. We’re doing everything we can to get the law repealed—to demonstrate to our politicians that the law is unconstitutional.”

In fact, many in the African American community have called Alabama’s harsh anti-immigrant law a “Juan Crow Law,” comparing it to our nation’s Jim Crow laws which encouraged legalized racial segregation against African Americans. And it’s not hard to see the connection with the racially suggestive phrasing in the law like “reasonable suspicion” and provisions that aim at limiting basic needs, like water, to undocumented immigrants.

Wade Henderson, President of the Leadership Conference on Civil and Human Rights, denounced Alabama’s law even before the Governor Bentley signed it. Henderson said the law “is designed to do nothing more than terrorize the state’s Latino community” and characterized it as “so oppressive that even Bull Connor would be impressed.”

Scott Douglas III of the Greater Birmingham Ministries called Alabama’s law “hateful.” In an interview with the ACLU, Douglas called on people to say “no” to a system that allows “people to be treated worse than animals and denying basic human rights.”

Congressman Gutierrez and select Congressional members plan to hold a public meeting in Birmingham in late November so that those affected by the law have a chance to tell their stories. Congressman Gutierrez, echoed Douglas’s call to action, urging people to bring an end to Alabama’s civil rights emergency.

“Justice-loving Americans from around the country were instrumental in shining a light on injustice in Alabama a half-century ago and came to the aid of young leaders like Dr. Martin Luther King, Jr. and Rev. Fred Shuttlesworth,” Gutierrez said. “It is no different today. Those who see a great injustice occurring now against the people of Alabama must come to their aid.”

As enforcement of Alabama’s immigration law continues to discriminate against immigrants and Latinos, the support of civil rights groups, African American leaders and Alabamians of all races should remind lawmakers in the state not to repeat the civil rights injustices of the past.