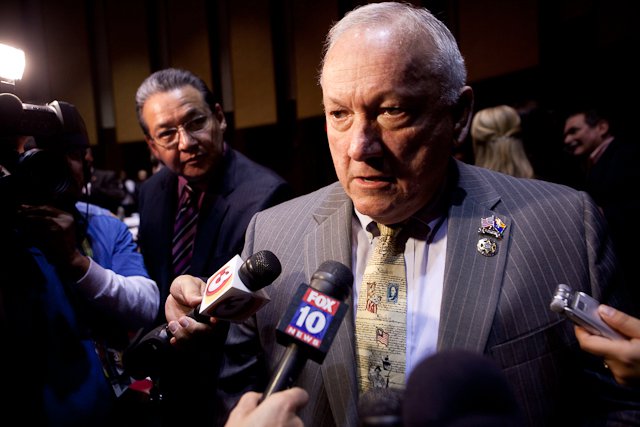 Arizona state senator Russell Pearce, the leading force behind Arizona’s SB 1070 and other anti-immigrant legislation, was defeated in a recall election Tuesday. Fellow Republican Jerry Lewis—a moderate on immigration issues—won with 54% of the vote.  Citing Pearce’s narrow anti-immigrant agenda and the damage SB 1070 inflicted on the state, a group called Citizens for a Better Arizona began the recall effort back in January. Today, many in Arizona and across the U.S. celebrate Pearce’s defeat as a victory for practical solutions over extremist rhetoric and anti-immigrant proposals. Pearce is believed to be the first Arizona state legislator to face a recall election.

At the time of its passage, SB 1070 was the most far-reaching immigration control law passed by a state. Most of the law was declared unconstitutional by the courts and never implemented, and Arizona suffered a huge blow to its tourism industry and its reputation. Rather than backing down, Pearce turned his attention to even more extreme anti-immigrant legislation—including the elimination of ethnic studies programs in schools and denying birthright citizenship to the children of unauthorized immigrants.

Pearce’s anti-immigrant agenda continues to cost Arizona’s economy. After SB1070 passed, major groups and associations cancelled events and conventions in the state. The Center for American Progress (CAP) estimated that Arizona would lose as much as $141 million in the food, lodging, and entertainment industries. Arizona was eventually forced to spend $250,000 for a marketing campaign to help improve its image after SB 1070 was enacted. At the end of February 2011, Arizona had already spent more than $1.5 million defending SB 1070.

Yesterday, Arizonans of all stripes decided they’ve had enough of Pearce’s self-promoting, anti-immigrant antics. Democrats and Republicans from business, faith-based, labor, and immigrant-rights groups supported the recall campaign. According to political analyst Chris Herstam, many Republicans believe that Pearce made immigration more of a priority than the economy, jobs, and education. Pearce’s replacement, Republican Jerry Lewis, took note. He focused his campaign on education and the economy and signaled a more reasonable approach to immigration:

“Certainly the immigration issue is important to many people including myself,” Lewis said. “We need to bring a civil tone to that discussion, a professional approach to solving it, an approach that is reasonable and won’t be … in the courts for years to come.”

While state legislators will undoubtedly continue to pursue costly state immigration laws, many, like Randy Parraz of Citizens for a Better Arizona, hope Pearce’s defeat will serve as a cautionary tale to other legislators. “This election shows that such extremist behavior will not be rewarded,” Parraz said, “and will be held accountable.”