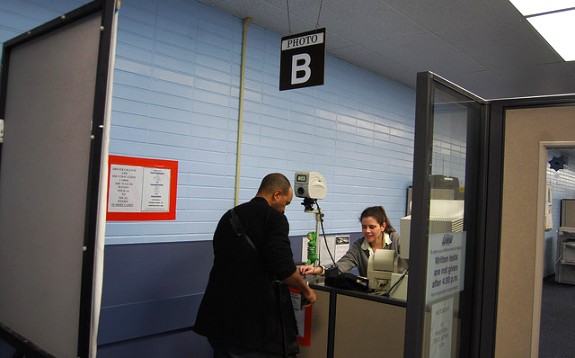 Alabama lawmakers want undocumented immigrants to be so afraid of the consequences of the state’s new anti-immigrant law (HB 56) that they leave the state. However, that’s not the only fear factor built into the law. Under section 6(f), state and local government employees must report violations of HB 56—which includes unlawfully present immigrants even attempting to complete a business transaction with the government—or face criminal penalties. In order to avoid criminal prosecution, government employees are likely to be suspicious of foreign-looking or sounding people. But the new law does not include details or require specialized training for state employees, making discrimination, mistakes and civil rights violations all the more likely.

Under HB 56, government employees who do not report violations can be found guilty of obstructing governmental operations—a Class A misdemeanor that carries possible punishment of a $6,000 fine and a sentence of 1 year in the county jail or at hard labor. Government employees must report a violation when there is “a reasonable cause to believe” that HB 56 is being violated. What constitutes reasonable cause? The law doesn’t say. And neither does the state’s Attorney General, Luther Strange, who says training is not one of his responsibilities.

It’s not just high-ranking state or local officials who will be expected to report suspected violations. Every person who works for state or local government—from custodians and clerks to agency heads—will have the same obligation. Nor will it be easy for them to identify violations of HB 56 or know what to do when they suspect them. Even Alabama officials, judges and police bemoan that they do not know when and how to apply the new law. While some training is planned for them, no one is suggesting that every government employee in Alabama be trained to spot violations or avoid civil rights violations.

Moreover, a strict reading of the law suggests that government employees will have to be vigilant no matter where they are or what they are doing. Nothing in the law says they have to be at a work site or on duty to be under an obligation to report suspected violations of HB 56. So an off-duty property tax office file clerk who is suspicious of a Spanish-speaking person trying to sign up for a library card might feel he has a duty to report that to avoid the possibility of criminal prosecution. And no amount of training will cover all the circumstances where a violation might be spotted in daily life.

The safest route for government employees then is to err on the side of caution and over-report what might be a violation of HB 56. Protecting themselves from possible criminal prosecution likely means wholesale violation of the rights of anyone who looks or sounds foreign. The fact the proponents of the law do not provide employees with any information or training proves that they have not contemplated the full scope of the extreme law. As the impact of HB56 becomes more apparent, it’s even more obvious that it must be stopped.