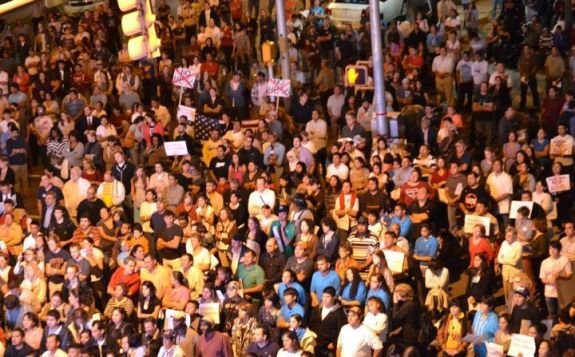 Thousands gathered outside the historic 16th Street Baptist Church in Birmingham, Alabama yesterday to demand the repeal of the state’s harsh anti-immigration law, HB 56. Religious, community and civil rights leaders, as well as a special Congressional delegation, urged state legislators to bring an end to Alabama’s immigration law—a law which continues to slow state businesses, separate families and drive immigrants from the state. The Congressional delegation also held an ad hoc hearing at Birmingham City Hall to hear how the controversial law is effecting state residents, especially the Latino and immigrant communities where, according to Rep. Luis Gutierrez, “the feeling of danger and despair is palpable.” One Congressional member, Rep. Al Green of Texas, commented that the law “deserves to be placed on the trash heap of history.”

During yesterday’s hearing, Birmingham Mayor William Bell told 11 Congressional members that Alabama’s law “smacks of apartheid and Jim Crow laws,” places financial burdens on cities and could force police officers to employ racial profiling. Echoing the mayor’s economic concerns, Rep. Raul Grijalva of Arizona forewarned that much like Arizona’s SB1070, Alabama’s immigration law “is going to hurt the economy and the social fabric of the state.”

Many are concerned that the law is already jeopardizing foreign investments in the state. Just this week, Alabama police arrested a Mercedes-Benz executive for failure to produce proper documentation. Normally he would have just been issued a ticket, but since the passage of HB 56, police are now required to pursue those suspected of being in the country unlawfully. According to a Mercedes spokeswoman, the Mercedes-Benz executive was visiting from Germany to propose new business plans in Alabama. The German car manufacturer—which has a plant near Tuscaloosa—is Alabama’s largest international trading partner, generating more than 40,000 jobs for the state and $6.8 billion in economic output.

David Bronner, chief executive of the Retirement Systems of Alabama, worries that the law will prevent potential foreign businesses from investing in the state. Currently, there are more than 400 foreign-based businesses in Alabama, hailing from 30 countries. “Sometimes we forget in Alabama that when we label a group as a problem and when we paint the brush so broadly, we’ve included most of the world,” Bronner said.

Aside from the economic impact on state businesses, HB 56 is also effecting the lives of Alabama residents, both legal and unauthorized. During yesterday’s Congressional hearing, the Southern Poverty Law Center (SPLC) gave examples of how Alabama’s extreme anti-immigrant law has impacted folks in the state. Taken from a telephone hotline set up after the law’s passage, SPLC reported that:

And those are only a few examples. HB 56 has also been widely criticized for its impact on Alabama schools, which reported a large absence of Latino students since the law’s passage.

This week, the National Education Association—along with the Alabama Education Association and National School Boards Association—filed a joint amicus brief this week challenging the law, which requires administrators to ask enrolling children about their legal status and that of their parents. The brief argued that Alabama’s law “will cause undocumented parents not to send their children to school and deprive them of their right to an education.” While that specific provision of HB 56 has been temporarily enjoined, the law runs counter to a Supreme Court ruling (Plyler v. Doe) which requires states to provide an education to all students regardless of immigration status. The U.S. Court of Appeals for the 11th Circuit will hear arguments on HB 56 in 2012.

Although Governor Robert Bentley has admitted the law “needs to be simplified,” Alabama legislators need to go a step further and consider the broader impact HB 56 is having on the state residents, businesses and communities. As critics made clear yesterday, the far-reaching impact of this anti-immigrant law is overwhelming.