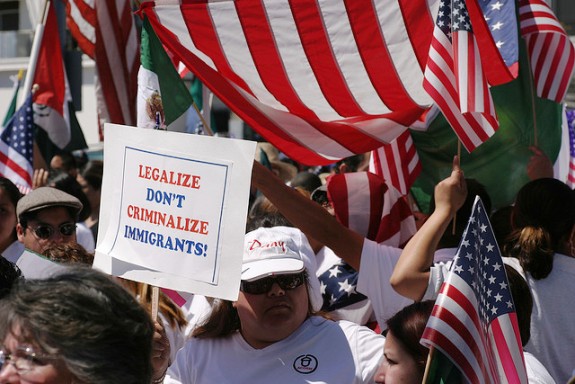 Last week, a new report released by the Pew Hispanic Center found that nearly two-thirds of all unauthorized adult immigrants currently living in the U.S. (10.2 million) have been here for at least 10 years and nearly half of them (4.7 million) are parents of minor children. The longevity of their U.S. residency and pattern of parenthood suggest that these unauthorized immigrants are integrated into American society, challenging the notion that ramped-up enforcement measures like Arizona’s SB 1070 and Alabama’s HB 56 are effectively driving unauthorized immigrants back to their countries of origin.

Pew also found that nearly half of all undocumented immigrants in the U.S. (4.7 million) are parents of minor children. Additionally, Pew estimates that roughly 9 million people in the U.S. live in a mixed-status home—meaning that at least one immigrant parents is undocumented and at least one child is U.S. born.

After living in the U.S. for 10 years or more, many in mixed-status homes, it’s reasonable to assume that these unauthorized immigrants are integrated into American society—they live here, they send their children to school here, they go to church here, they pay taxes here. The idea that harsh state immigration enforcement policies are “working”—that is, forcing unauthorized immigrants to return home—just doesn’t seem to hold water.

As Pew’s report concludes, the data “reflects the fact that relatively few long-duration unauthorized immigrants have returned to their countries of origin.” While some may return to their home countries, others likely migrate to neighboring states, states where they have family or can find work.

What we need, say experts like Doug Massey of Princeton University, is an earned path to legalization—a path that even conservative voters think is necessary. According to Massey, given the recent post-recession dip in migration from Mexico and the apparent lack of self-deportation of unauthorized immigrants who have long resided in the U.S., “there is really only one thing that remains to be accomplished … the creation of a pathway to legalization for long-term undocumented residents.”

Until then, Congress and states legislatures will continue to waste time, resources and money on enforcement measures that do nothing to address the realities of our broken and outdated immigration system.