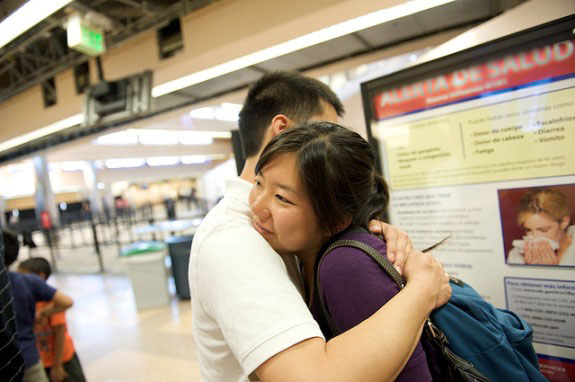 Today, the administration took another important step toward fixing one of the most notorious problems with our broken immigration system—the 3 and 10 year bars. The U.S. Citizenship and Immigration Services (USCIS) announced today that it was filing a notice of intent to change a rule which would streamline the application process for many relatives of U.S. citizens currently eligible for permanent resident status, thereby minimizing the amount of time that applicants would have to be away from their families before being admitted into the United States.

Under current rules, thousands of people who qualify for legal status must leave the U.S. to obtain their permanent resident status, but as soon as they leave, they are immediately barred from re-entering the U.S. for 3 or 10 years because of their unlawful presence in the United States. Many are eligible for a family unity waiver (which waives the bar to admission if extreme hardship to a spouse or parent can be established), but the way the law is currently implemented, the waiver can only be applied for from overseas That process can often take many months or even years, deterring otherwise eligible applicants from applying for legal status who instead remain unauthorized in the U.S. rather than risk separation from their families. (For more information on 3 and 10 year bar, see this fact sheet by the Immigration Policy Center.)

Under the proposed “in-country processing” rule change, spouses and children of U.S. citizens who apply for residence, but need a family unity waiver to re-enter the United States, will be allowed to apply for the waiver without leaving the U.S. The new rule seeks to help only spouses and children of U.S. citizens, not spouses and children of legal permanent residents, and does not alter or revise the eligibility standards for green cards or waivers. The proposed new rule would only affect persons whose sole need for a waiver is based on having lived in the U.S. without authorization (persons seeking a waiver on other humanitarian grounds must still leave the U.S.)

This “in-country processing” proposal means that USCIS could grant a provisional waiver here in the U.S, and many applicants would not face the same waiting period outside the country.  It is important to note that applicants would still be required to depart from the U.S. before receiving final approval and legal status.  But eligible immigrants will be encouraged to go through the process rather than remain unlawfully in the U.S.

Although the actual rule change will not go into effect for several months—a “notice of intent” to change the rules governing the adjudication of waivers for the 3 and 10 year bars was published in today’s Federal Register and will be followed by a call for comments and a comment period—the revision will make a huge difference in the lives of many U.S. families.

Applicants currently face long separations from their U.S. citizen family members as well as dangerous situations while they wait.  Many waivers are processed in Ciudad Juarez, Mexico, a city wracked with violence over the last several years.  This small step of allowing these family members to apply for and receive waivers inside the U.S. may save them from long, potentially dangerous separations from their families.

Some may argue that this rule change is an example of the president overstepping boundaries and bypassing Congress to reform the immigration system. These claims are wrong. While Congress writes the laws—including the 3 and 10 year bars—the executive branch decides how to execute the laws through rules and regulations which align with their priorities and current agency resources.  The waivers are currently processed overseas because of an administrative rule, and the current administration has every right to change that rule, just as all administrations before them.

The Obama administration is proposing a rule change that will partially ameliorate one of the most contradictory rules of immigration law, thereby encouraging legal immigration and helping to keep U.S. families together.