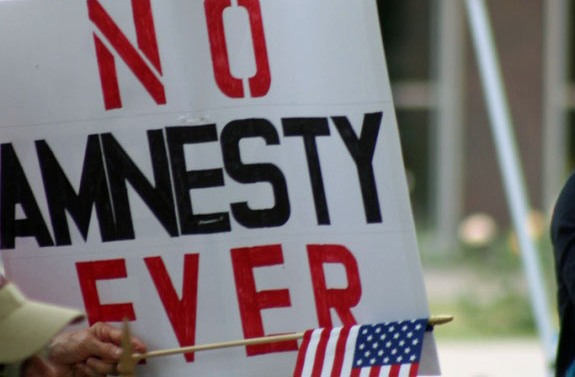 The Obama administration’s recent announcement that it intends to change regulations allowing the children and spouses of American citizens to stay together while processing  applications for legal permanent resident status has the immigration restrictionists crying wolf—or more accurately “amnesty”—once again. They are characterizing the administration’s rule change, as they do any and all actions that are not enforcement related, as a “backdoor amnesty.” Some are also characterizing the change as a strategy to bypass Congress.

Congressman Lamar Smith, for example, said in a statement that the Obama administration was bending long-established rules to put the interests of “illegal immigrants” ahead of U.S. citizens. Kris Kobach, Kansas Secretary of State, called the announcement “part two” of the amnesty plan first announced last fall when the Obama administration said it would review current cases in deportation proceedings to see whether they were really priority cases. Calling this new proposal any kind of amnesty is not only inaccurate, it’s tired.

As reported on Friday, the administration plans to issue a regulation that would address a long-standing problem in immigration law—a Catch 22 created by requiring those  spouses and children of U.S. citizens who have been in the country unlawfully to depart the U.S. before completing the processing of their application for lawful permanent residence. The trouble is that once they leave the country, they are subject to a three or ten year bar for unlawful presence and need a waiver to get back in. The new proposal would allow them to submit the waiver application before departing the U.S., thus reducing the time, anxiety, and sometime danger inherent in waiting abroad for a decision.

This Catch-22 is one of the most notorious problems in the immigration system and the regulatory change is long-overdue. Due to processing backlogs, uncertainty of outcomes and violence in cities with key U.S. consulates—such as in Ciudad Juarez, Mexico—the prospect of becoming a lawful permanent resident has become an uncertain and frustrating affair for some applicants. Recognizing this problem, which arises in part from regulation, is an example of USCIS acting responsibly to address a problem of its own regulatory making in an expedient and lawful way.

USCIS’s proposed change, or “notice of intent”—which will be subject to the full range of public notice and comment—is intended to change a processing requirement set out in a regulation, not in the statute. If anything, offering a notice of intent to issue a rule gives the public even more warning that the government intends to undertake a the regular process of adopting a new regulation.

The truth is this rule change will not open the doors for more immigrants, or provide relief for the millions of undocumented immigrants in this country without the necessary family and work relationships to obtain status. Therefore, calling it “amnesty” is nothing short of hysterical.

The public is tired of knee-jerk responses to all things immigration. Polls consistently show that people want solutions, not political wrangling. The fact that opponents of immigration reform paint everything that isn’t enforcement as “amnesty” isn’t surprising. Their responses, just like their solutions, are limited and short-sighted. In this case, the policy they are calling “amnesty” we call common sense.